(Press Release) VIENNA, 29 June – Eighty-one million people in all 14 Danube countries are invited to ‘Get Active for a healthier Danube’ on 29 June as part of our celebrations for the 15th annual Danube Day. 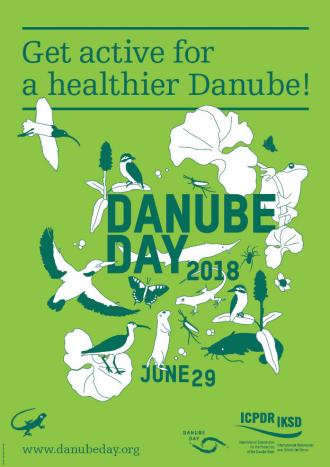 The theme this year is a “Healthier Danube,” inspired by the second pillar of the 2016 Danube Declaration which has made it a priority of all Danube Basin countries to make the Danube River Basin cleaner, healthier and safer for everyone to enjoy.

Danube Day celebrates the Danube and the rivers that flow into it, and the vital role they play in providing water, food, power, recreation and livelihood. Danube Day commemorates the anniversary of the signing of the Danube River Protection Convention in Sofia, Bulgaria, in 1994.

Danube Day has become the largest river festival in the world, with huge festivals on the riverbanks and public meetings as well as educational events. It is also a basin-wide celebration reflecting the diversity of the region. On the international level, the coordination is carried out by the International Commission for the Protection of the Danube River (ICPDR) Permanent Secretariat; nationally, the member countries and partners organize the events. Danube Day is supported by corporate partners, in particular through the “Clean Danube Partnership” with Coca-Cola Hellenic and the Coca-Cola Company.

ICPDR 2018 President, Helge Wendenburg said: “On June 29th, we celebrate the strength and vitality of our Danube family that has successfully worked together to make the Danube rivers healthier. The state of our rivers is not only a barometer for the health of the wider environment, but also for the state of relationships between the countries and communities that share the Danube. The health of the Danube countries depends on the health of its rivers. In the face of increasingly serious pressures, particularly from climate change, our solidarity, cooperation and exchange of expertise is more important than ever.”

The International Commission for the Protection of the Danube River is an international organization consisting of 14 cooperating States and the European Union. Since its establishment in 1998, it has grown into one of the largest and most active international bodies engaged in river basin management in Europe. Its activities relate not only to the Danube River, but also the tributaries and ground water resources of the entire Danube River Basin.

The ultimate goal of the ICPDR is to implement the Danube River Protection Convention, and make it a “living” instrument. Its mission is to promote and coordinate sustainable and equitable water management, including conservation, and improvement and rational use of waters for the benefit of the Danube River Basin countries and their people. The ICPDR pursues its mission by making recommendations for the improvement of water quality, developing mechanisms for flood and accident control, agreeing on standards for emissions and by assuring that these measures are reflected in the Contracting Parties’ national legislations and are applied in their policies.

In addition, the International Danube Art Master -  a creative schools’ competition -  is being held in all Danube countries in cooperation with the Global Water Partnership Central Eastern Europe (GWP CEE) during Danube Day. The contest invites young people from 14 countries to create artwork inspired by the rivers and their surroundings. The international winner will be announced in autumn 2018.

To find out more about the numerous Danube Day events, please visit: www.danubeday.org