Sturgeons have been around for more than 200 million years, and the Danube River Basin has represented a key part of the habitat for these migratory fish. Sturgeons swim thousands of kilometres up the Danube River from the Black Sea to spawn, and have long formed a key part of the region’s cultural fabric and shared heritage – from the inland banks of the Danube to the Black Sea coast. Man-made obstacles, however, have made migration all-but-impossible for fish like the sturgeons of the Danube River Basin. One of the largest is the Iron Gates hydropower project, lying on the Danube River itself, bridging the river-border between Serbia and Romania. This vast project has been a vital source of low-carbon energy for decades, yet its blockage of the river’s concourse has contributed to the near-extinction of the Danube sturgeon.

That’s where WePass steps in
The main objective of this project – whose full name was “Study on environmental and ecological thematics in the framework of MRS and policy coordination with DG NEAR/ENV: Support for the implementation of the Feasibility Study analysing options for characteristic Danube fish migration at Iron Gate I & II” – was to take the first major steps towards overcoming this gargantuan obstacle. Coming to a close in 2021, We Pass brought together a world-class team of experts and partners from various European countries to work out how we can create those fish routes back up the Danube without compromising essential power production at the Iron Gates.

Furthermore, the Danube River isn’t just a key migration route, it also represents a vital habitat for a variety of species. Constructing fish passes at the Iron Gate Dams would re-open some 960 km of the Danube River, running all the way until the Gabčíkovo Dam in Slovakia, and granting many migratory fish including sturgeons, passage to long-inaccessible waters.

With concerted study and efforts such as We Pass, we truly believe iconic fish species such as the Danube sturgeon, can still be saved from completely disappearing. Better yet, should we act swiftly, they can also have their numbers brought back up to healthy levels throughout the Danube River Basin and beyond.

Who WePass Was
The entire project was financed through a grant awarded by the European Commission (DG REGIO), and it aspired to have a strong macro-regional character, focusing on the impact and ramifications any measures could have for the entire Danube Region. This naturally meant We Pass required close and constant co-operation with the EU Strategy for the Danube Region (EUSDR), central to this project, while various other synergies are always being explored.

We Pass was set up by several partners in various countries across Europe:

During We Pass, we wanted to find a creative and interactive way to learn about the project, the Iron Gates, and the plight of migratory fish in the Danube River Basin. So we came up with Sturgeon Steve, our mascot sturgeon trying to make his way up the river. 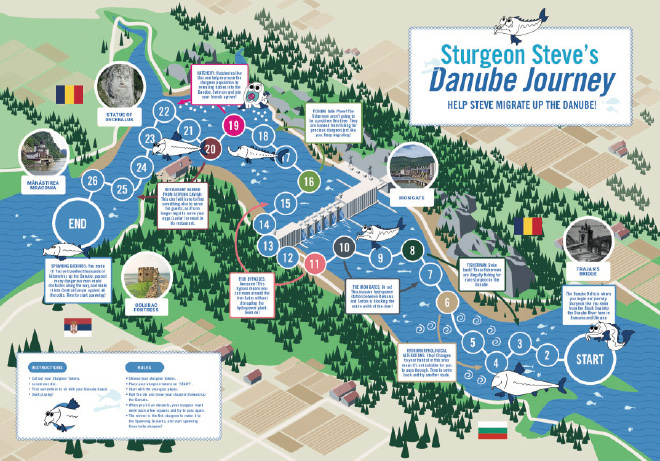 The division of work for We Pass took the form of 5 Tasks, shown below. The ICPDR took the lead on this project, taking responsibility for Task 1: Project Management. Reporting to the project management team behind Task 1 however, were the four main tasks of We Pass, each with their own expected outcomes and deliverables.

Task 2:
Analysis of Current Situation & Data Gathering
While all hydropower stations, dams, rivers, and migratory fish routes have hugely varying and idiosyncratic needs, there’s a wealth of experience and data from similar projects around the world that can still help us. It was thus highly valuable for us, during We Pass, to take stock of all such available data to help prove where best to target our resources – not to mention what methods to avoid – when formulating our solution at the Iron Gates. A huge amount of technical data regarding the water regime around the dams was provided, dating back to the 1970s. Additionally, the team produced a thorough literature review, taking into account experience and learnings from similar cases around the world, including fish passes in Russia, the USA, and Canada.

Task 3:
Monitoring Fish Behaviour at Iron Gates I & II
The team behind Task 3 went out into the field to gather new data from the river’s waters and fish themselves. Assessing where migratory fish tend to aggregate at Iron Gates II was one of the key aims of Task 3, with the team deploying acoustic telemetry to measure the numbers and locations of migrating fish. The Iron Gate II dam is 1.7 km long, thus it’s vital to identify the key locations at which passes would be most effective, and where fish could ‘find’ an entrance. Some additional sub goals of the project included monitoring of fish migration behaviour in the reservoir of the Iron Gates II dam (i.e., the north side), and to work out the mortality rate of fish swimming through the Iron Gates’ turbines during downstream migration.

Task 4:
Communication Activities
Besides the gathering of data, scientific analysis, and formulation of vital first steps, a strong communications strategy is essential to any undertaking with the ambitions of We Pass. A wide variety of stakeholders – including the public themselves – have to be brought up to speed and on board to ensure the long-term success and maintenance of our aims. Communications Activities undertaken included:

Task 5:
Data Quality Assurance & Quality Checks, 3D basis model
Considering the paramount importance of data to We Pass, Task 5 (full title: “Data quality assurance and quality control and 3D basis model”) had the essential job of both specifying and thoroughly checking the huge variety of data provided by partners throughout the project. This included data on a variety of important aspects of the Iron Gates, including its structure, various types of modelling (geological, terrain), geospatial data, and more.

Though held online as a result of the ongoing measures in place due to Covid-19, the Final Conference for We Pass, held on 17th & 18th November 2021, brought a fruitful exchange of findings that brought the initial phase of this project to a positive and energising close. Over 50 participants took part in the event via Zoom, including the supportive voices of both Bettina Doeser of DG ENV, and Johan Magnusson at DG REGIO. “We have a very important future ahead of us,” explained Ms. Doeser, “so we are extremely happy from the European side to be behind the second stage of this”. Mr. Magnusson agreed: “We have the right to be proud, as a lot has been done – but there’s still more to get done.”

Stay tuned for WePass 2!
The second phase of this project is already underway…
visit we-pass.org for updates.

Tristan Bath
is a consultant and editor of Danube Watch, who has been calling the Danube home for several years.