On Tuesday 9 April 2019, the EU project We Pass – facilitating fish migration and conservation at the Iron Gates – was kicked-off in the Hotel Aquastar, Kladovo (Serbia). 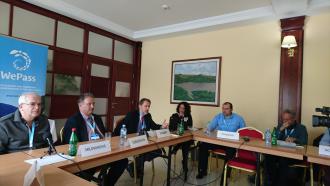 The meeting was organized by the International Commission for the Protection of the Danube River (ICPDR). The 30 participants, project partners, stakeholders, as well as representatives of the Đerdap Hydroelectric Power Station and an interested public discussed the aims, perspectives and desired outputs of the project.

The main objective of the kick-off was thus to ensure a common understanding of the project’s objectives and the expected results, as well as the necessary organizational structure and tasks to reach the goals set.

A press conference opened the day at Hotel Aquastar, wherein key figures involved in the project could explain some of the proposed activities of We Pass for members of the press and public. After the lunch, the attendees were given the opportunity to go on a tour of the Đerdap Hydroelectric Power Station itself, getting introduced to the inner workings of the dam and power station that crosses the Danube between Romania and Serbia. This was followed by a scenic boat trip through the Iron Gates gorge, visiting the region’s key landmarks such as the Tabula Traiana, and Monastery Mraconia.

Following the boat tour, the participants were invited to an open session seeking to explore the project in greater detail and kick off the public discourse on We Pass’ aims. The meeting was officially opened by Mr. Ivan Zavadksy, ICPDR Executive Secretary and Ms Edith Hödl (ICPDR), We Pass Project Manager, and followed by introductory words on the work packages, the activities and the project structure, highlighting planned activities and expected results for We Pass.

Initially, the project’s five work packages were presented in an elevator pitch style giving participants an overview of the activities and: Miodrag Milovanovic (Jaroslav Černi Institute) presented the second task, Analysis of current situation and data gathering. Marian Paraschiv (DDNI) presented the activity dealing with monitoring of fish behaviour Iron Gate I & II, which includes detailed operational plan on the monitoring activities, including the number of species caught and tagged, the plans and timeline for purchasing equipment and the agreement with Serbian Fishermen for support of fishing. Furthermore, Hélène Masliah-Gilkarov (ICPDR) presented the We Pass communication activities, including the communication strategy, the project Social media presence, and the way forward in involving stakeholders and involving the public to achieve greater visibility. Finally, Wilco De Bruijn (Consortium CDM Smith - OAK Consultants) spoke about the fifth planned activity: Data quality assurance and quality checks, and 3D basis model. Following the presentation of each work package, the participants were invited to participate in a ‘world café’ round; an opportunity to ask questions and find out more about the new opportunities offered by We Pass, with each activity leader hosting small round table discussions for 15-20 minutes directly with the public.

This international project We Pass is an important milestone in the process of enhancing migratory fish population and ensuring their survival in the Danube region. This decline is due to poaching (stemming from improper fishery management and insufficient legal enforcement), blocked migration routes as a result of dams, loss of habitat caused by expanding infrastructure on the river, river navigation, hydropower, flood protection measures, and other negatively impacting phenomena such as pollution. Thus, the chief aim of We Pass is to run a feasibility study exploring alternatives and seeking solutions to blocked routes and any river mismanagement that may be having adverse effects on these fish species, aka “Support for the Implementation of the Feasibility Study analysing options for fish migration at Iron Gate I & II”.

The following are among the main goals defined for We Pass:

We pass in a nutshell:

The project, We Pass – facilitating fish migration and conservation at the Iron Gates, aims to facilitate fish migration in the Danube River Basin, and has been set up with EU funding (DG REGIO) by the ICPDR, CDM Smith, Jaroslav Černi Institute, and DDNI. Its focus is on the preservation and reestablishment of endangered fish species migration routes in the Danube River, its tributaries, and specifically at the Iron Gates hydropower plants, which have become hindered in recent decades due to a multitude of factors. Migratory fish are similarly of paramount importance to the region’s broader interlinked environmental well being for a variety of reasons. Native Danube river fish species – such as sturgeon (the ICPDR’s flagship species), shads, barbel, nase, and others – are keen indicators of the region’s environmental health, and lie at the heart of an intricate and ancient ecosystem. Yet they are now listed amongst the most threatened species on the IUCN Red List. Many are living relics and symbols of the Danube region’s common shared identity. Thus, protecting these species on the brink of extinction fits in directly with the priorities of the EU Strategy for the Danube Region (EUSDR) established in 2011, specifically Priority Areas 04 (“Maintain and restore the quality of waters”) and 06 (“To preserve biodiversity, landscapes and the quality of air and soils”).