As the climate crisis worsens, severe droughts devastate European landscapes. According to the data published by the European Drought Observatory, more than 60% of land in the European Union and United Kingdom – an area nearly the same size as India (!) – is now affected by drought conditions. The Danube River Basin and the Danube itself have been affected by serious droughts in the past, e.g., in 2003, 2015, and now again one of the most feared natural phenomenon has gripped much of the Danube River Basin. 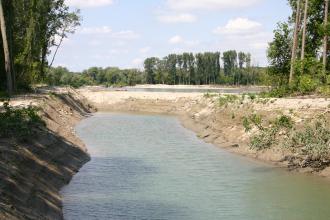 Being aware that droughts can have a high damage potential such as ecological damages, economic losses, and of course implications on human health, the ICPDR has been increasingly mindful of the issue of water scarcity and droughts in the Danube River Basin.

For instance, in 2015, the ICPDR published a report on the impacts of droughts in the Danube Basin that year, the measures taken, and the lessons learned from this extreme event. The report indicated droughts to be one of the major future topics for water management, to be closely coordinated with the implementation of the EU Water Framework Directive and its River Basin Management Plans (RBMPs), as well as the EU Floods Directive and its Flood Risk Management Plans.

Furthermore, the issue of droughts and its impacts were also key elements of the updated ICPDR Strategy on  Adaptation to Climate Change published in 2018. This Strategy provides an overview of guiding  principles supporting the integration of adaptation to climate change into river basin management, and also addresses the topics of drought management, water scarcity and adaptation. The findings were incorporated into the Danube River Basin Management Plan (Danube RBM Plan) 2021. The Plan guides the management of significant water issues – also known as SWMIs - to achieve good status of all waters in the Basin. This led to the addition of “Effects of climate change (drought, water scarcity, extreme hydrological phenomena and other impacts)” as a new Significant Water Management Issue in the Danube River Basin.

It will now be a joint management task of the ICPDR countries to further deal with adaptation and to mitigate water-related effects of climate change including the aspects of drought, water scarcity, extreme hydrological phenomena and other impacts. This also includes the Danube River itself.

Preventive measures should then be taken to mitigate impacts of climate change, to adapt to it, and to minimize the related damages, thus reducing the vulnerability of aquatic ecosystems and water related ecosystems to climate change.

Being aware of significant water management issues on national and international basin-wide level is key to effectively tackle challenges as well as to improve water resources together. If we speak about the entire Danube River Basin, we see good cooperation as essential to jointly address water management issues and agree on related aims to reduce and/or eliminate possible negative impacts.

In this regard, the Danube Ministers and Ministers Representatives at the ICPDR Ministerial Meeting on 8  February 2022 reaffirmed the “Effects of Climate Change (drought, water scarcity, extreme hydrological phenomena and other impacts)” as a new significant water management issue for the Danube River Basin. They expressed their support for the implementation of restoration, protection and mitigation measures for habitats, river continuity and transboundary ecological migration corridors. They further emphasized the importance of actions towards improvement of hydro- morphological conditions by highlighting the importance of further synergies between flood and drought mitigation measures, nature conservation and hydro-morphological measures (implementation of non-structural measures, e. g. floodplain preservation and restoration) and monitoring of measure effectiveness.