Working together for a living Danube

A partnership between WWF and The Coca-Cola Company is restoring wetlands and initiating a regional movement for good water stewardship. 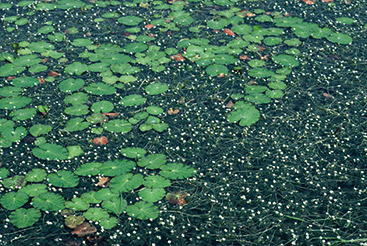 The partnership between WWF and The Coca-Cola Company will reconnect former floodplains to the river system by, for example, opening dikes and dams, creating channels, as well as retaining water on the floodplains by working closely with relevant local authorities and stakeholders.
© WWF/Canon/Klaus Henning Groth

Wetlands are hotspots of biodiversity and provide a myriad of benefits and services, including flood protection, drinking water, nutrient removal, wood and fibre, biomass, tourism and recreation, food, fish and fowl.

Despite this, the Danube has seen 80% of its floodplains and wetlands disappear over the past 150 years. Damage to the river has mainly been caused by diking, dredging and damming to meet the needs of hydroelectric power and shipping, and to keep
floodwaters at bay. This has resulted in plummeting fish and wildlife populations, a decrease in water quality and damage to wetlands, which can no longer provide much needed biodiversity hotspots or act as buffers to floodwaters.

That’s why WWF and The Coca-Cola Company (TCCC) have initiated a seven year partnership to restore vital wetlands and floodplains along the River Danube and its tributaries (see also “Dear Readers”). The ambitious project aims to increase the river capacity by the equivalent of 4800 Olympic-sized swimming pools
(12 million m3) and to restore over 7422 football pitches worth of wetland habitat (53km2) by 2020.

Restoring ‘Europe’s Amazon’. In Hungary, the project focuses on restoration work along the Barcs-Old-Drava former meander, in cooperation with Croatia. The area is part of the future five-country Mura-Drava-Danube Trans-Boundary Biosphere Reserve. It is sometimes referred to as ‘Europe’s Amazon’, as it stretches from Austria, across Slovenia, Hungary, Croatia and into Serbia.

This transboundary restoration work will demonstrate a relatively simple and cost effective way of improving the ecological status of the wetlands and surrounding forests, so as to develop ecotourism. The project is supported by the EU LIFE+ programme with The Coca-Cola Foundation contribution to co-finance. Later, an additional wetland restoration project in Hungary will enhance river morphology and improve the conditions for riverine species.

In Croatia, the project will focus on restoration activities along the Drava River part of the area. The aim is to restore or recreate eight sidearms that will improve natural river dynamics and habitats, flood risk mitigation, ecotourism and recreation.

Reconnecting wetlands. In Serbia, the project includes restoration work on the Bestrement oxbow, situated in the Special
Nature Reserve Gornje Podunavlje. This area lies on the Danube floodplain, but is disconnected from the river by dikes and is almost totally overgrown with reeds and willows that are closing the open water. In the past the area was a very important breeding site and migration stop-over for up to 700 pairs of heron, but it has vanished as a result of drying and lack of feeding sites. The aim is to improve the water regime throughout the year using existing irrigation canals by the construction of a sluice.

In Romania, the projects will focus on restoration work at the Garla Mare Fish Farm along the Lower Danube Green Corridor, the location for one of Europe’s most ambitious wetland protection and restoration initiatives. The aim is to connect the transformed wetlands to the natural flood pulse of the Danube River. This will not only produce ecological benefits, but will improve the river’s retention capacity in the event of future flooding. It will also provide ground for sustainable land use such as grazing or bee keeping. In total, 5 million m3 of freshwater (or the volume of almost 2000 Olympic-sized swimming pools) will be preserved or returned to nature. Further wetland restoration projects in Romania will support the habitat of freshwater species, reduce the
flood risks and enhance sustainable land use.

Removing migration obstacles. In Bulgaria, the project aims to restore over 30km2 of river habitats along the Danube tributaries
that are home to six threatened and endangered fish and mollusk species by removing migration obstacles, restoring the gravel riverbed and building a fish pass. This restoration work, along with targeted conservation activities for these species (such
as restocking), will help improve the river’s conservation status. The project is also supported by the EU LIFE+ programme.

In addition, another wetland restoration project in Bulgaria – whose site is under consideration – will enhance the natural condition of the river ecosystem, encourage sustainable land use and provide space for rare and threatened species.

Revitalising habitats. In Austria, the partnership has already restored the last soda lakes, a unique habitat next to the Neusiedler See and close to Coca-Cola’s Edelstal production facility. These last lakes – with their milky-white waters – are threatened by poor drainage channels and consequently by lower ground water levels, which result in an interruption of salt transport from the groundwater to the soil surface.

The aim of the project is to close drainage ditches and thus raise the groundwater table to former levels, which leads to 650,000 to 1,000,000 m3 of water being brought back to nature. The activities will also benefit local tourism, which is dependent on the abundance of fauna – mainly birds – around the salt habitats, as well as agriculture, which also suffers from the current low ground water level.

Since 2007, The Coca-Cola Company and WWF have worked together to conserve and protect freshwater resources around the world while helping to improve the efficiency of Coca-Cola’s global operations. To date, the partnership has led to major conservation gains, including helping to improve the ecological health of seven of the world’s most important freshwater basins across five continents, helping improve the Coca-Cola system’s water efficiency by 20%, working to prevent 5 million metric tons of CO2 emissions across Coca-Cola’s global manufacturing operations, and promoting more sustainable agricultural practices in the company’s supply chain. 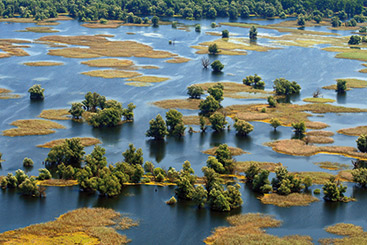 The partnership between WWF and The Coca-Cola Company will reconnect former floodplains to the river system by, for example, opening dikes and dams, creating channels, as well as retaining water on the floodplains by working closely with relevant local authorities and stakeholders.
© WWF/Canon/Klaus Henning Groth

A regional movement is on its way for wetland conservation and restoration, as well as good water stewardship. By the summer of 2015, the Living Danube Tour, which started in Serbia just before Danube Day 2014, will have visited more than 25 locations in Bulgaria, Croatia, Hungary and Romania, allowing visitors to learn more about the Danube, the benefits we all receive from the river and the potential threats. A quiz website on www.panda.org livingdanube tests visitors’ knowledge about the river and lets them care for a virtual section of it.

Next: The heart of the Huchen population beats on the Balkans