Efficient water management in a basin as large as the Danube requires the coordinated efforts of multiple countries; collaboration is necessary to develop the practices which will form the basis of this relationship. 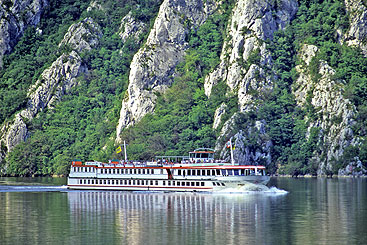 International cooperation on water in the Danube River Basin is of particular importance for the Republic of Serbia for two main reasons. Firstly, the country is situated in the basin’s middle and lower parts with over 90 percent of its territory in the basin. Furthermore, before entering Serbia water from the Danube River and its several tributaries passes through the territories of over ten countries – an area with a population of over 50 million people. Secondly, large installations, such as the Đerdap (Iron Gate) Hydropower and Navigation System and the Danube-Tisza- Danube Hydrosystem, both located in Serbia, have a considerable influence on the regime of this huge European watercourse. Therefore, proper water management in the Republic of Serbia calls for good cooperation with other countries in the basin, which is ensured through the ICPDR.

Building on history. The tradition of water management in Serbia goes back a long way, considering that significant water regulation as well as the construction of large hydrotechnical structures in the Autonomous Province of Vojvodina began as early as the 18th century. An efficient water management was established after World War II, so high standards have been reached in numerous departments of the water sector: potable water supply, flood prevention, soil drainage, etc. Unfortunately, some water sector departments have remained insufficiently developed, mainly because of the economic problems which emerged in the 1990s, and maintenance of the existing systems has been inadequate.

The Republic of Serbia (at the time, part of the Federal Republic of Yugoslavia) became a member of the ICPDR in 2003. As efficient water management in such a big basin requires the coordinated efforts of multiple countries, it is necessary to collaborate on the development of planning documents that will form the basis of this relationship. Therefore, water management cooperation in the Danube River Basin has been significant for the preparation and implementation of the Republic of Serbia’s European integration processes – this highly successful cooperation has helped Serbian institutions and experts broaden their knowledge of European legislation concerning water, and has also enabled a smoother harmonisation process with the other Danube Basin countries’ standards and practices. On the other hand, the knowledge and experience of Serbian water experts has contributed to the higher overall quality of water management in the Danube River Basin.

Next: Montenegro - Protecting resources for all stakeholders