A Joint Statement provides guidance for the maintenance and development of current and future inland navigation infrastructure, and is the only platform of its kind in the basin bringing together experts in transport and environmental protection to work toward shared goals for the river. 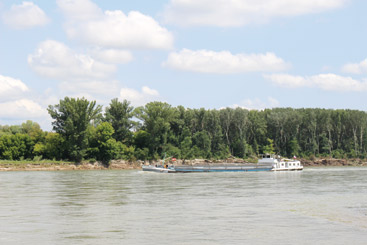 A Joint Statement is the only platform of its kind in the basin bringing together experts in the fields of inland waterway transport and environmental protection to find solutions that balance the goals of the navigation sector with the environmental needs of the river.
© ICPDR

Inland navigation can contribute to more environmentally sustainable transport, particularly where it substitutes for road transport, but it can also have a negative effect on ecosystems. Recognising this potential conflict, the ‘Joint Statement on Guiding Principles for the Development of Inland Navigation and Environmental Protection in the Danube River Basin’ was drawn up in 2007, led by the ICPDR with the Danube Commission and the International Sava River Basin Commission.

Much progress has been made in implementing the proposals set out in the Joint Statement, especially in establishing a dialogue between the navigation and environment community. “The Joint Statement process has encouraged inland navigation projects to take biodiversity conservation aspects, EU environmental legislation such as the Water Framework Directive and stakeholder involvement more seriously,” says Irene Lucius, Regional Conservation Director of the WWF’s Danube-Carpathian Programme. “This is undoubtedly an important step forward.”

However, despite the progress made, important further steps are still to be taken. “Some projects are still being implemented with critical hydrological or ecological data missing,” says Lucius, “and without sound understanding of how EU environmental legislation such as the Water Framework and Habitats Directives are to be applied.”

Dejan Komatina, Secretary of the International Sava River Basin Commission, said that broadening the scope of the information exchange to include reporting on relevant environment protection projects “would enable the information flow in both directions – from the navigation sector to the environmental protection sector and vice versa – and affect the ownership in a positive way.”

Fairway rehabilitation and maintenance. Inland navigation transport services are dependent on stable fairway conditions and a number of guidance activities are working to ensure efficiency. The Fairway Rehabilitation and Maintenance Master Plan, developed under the EU Strategy for the Danube Region and endorsed in 2014, identifies 11 stretches causing the biggest navigational problems and highlights the measures to ensure effective waterway infrastructure parameters along the Danube and its tributaries.

To realize the Master Plan, the five-year FAIRway project began this July to elaborate coordinated national action plans, procure equipment for hydrological services, execute and evaluate pilot programmes, develop innovative approaches such as aerial monitoring and prepare future implementation projects.
In addition, a waterway maintenance group under PLATINA II is developing a manual on best practices in waterway maintenance for the end of 2015. The manual will collect lessons learned from practice across river corridors and make recommendations for practical implementation.

Largest EU investment in transport. Some €11.93 billion has been allocated for the first call for proposals under the European Commission’s Connecting Europe Facility Transport (CEF-T) infrastructure policy – representing the largest ever EU investment in transport infrastructure modes of all kinds, including inland waterways. The main priorities for funding of the 2014 CEF-T calls were major cross-border projects and projects addressing the main bottlenecks on the nine TEN-T multimodal corridors.

The second call for CEF-Transport funding opened in November this year with a closing date in February 2016. Some €7 billion will be available for cohesion countries and €1 billion for the €3 horizontal priorities of the CEF, including Motorway of the Sea projects. The results of the second call will be announced in June 2016.

Next: Danube Adventure: learning about the river in a playful way