Plastics and microplastics in the Danube River

While there is increasing awareness of the environmental dangers posed by plastics, until now few fresh water studies were available for comparison. However, a new survey from the Environment Agency Austria is providing sound data on the transport of plastic particles in the Danube River. 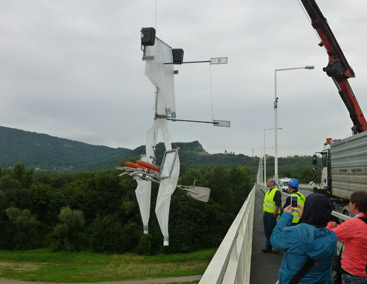 Plastics have been serving societal development over the last 60 years because of their excellent material properties. Over this period of time, production of plastic has increased from 1.7 million tonnes in 1959 to more than 280 million tonnes annually today. This number represents roughly 40 kg of plastics produced annually for each of the approximately 7 billion people on Earth.

Some fractions of postconsumer waste, however, escape the controlled waste streams and find their way into the environment. Owing to the material’s stability ,plastic barely decomposes at all and therefore remains in the environment for a long time. Exposure to sunlight and mechanical and chemical forces alters the material and slowly weathers it into debris the size of a few micro meters, which are easily dispersed in the environment.

Plastic waste in the environment was first recognised as a problem mainly in marine regions. Initial reports about plastic garbage patches in the Atlantic and Pacific Oceans had already emerged in the late 1970s. Owing to its floating behaviour it is known to have a negative impact on marine organisms in almost all parts of the trophic layers, depending on the particle size. Also, transfer of plastic particles along the food chain has been observed. More than 80% of marine plastics is attributed to land-based sources with rivers as the main contributors. Studies in fresh water systems are rare, however, and because of the use of different methods for sampling and measurement, results are mostly incomparable.

The term ’microplastics’ generally describes plastic particles that are less than 5 mm in diameter. This represents a broad range down to the nano scale. Still, there is no binding definition of size or composition of microplastics.

Sampling the Danube River. In spring 2014, Environment Agency Austria was invited to design and lead a survey in order to determine the transport of plastic and microplastic in the Danube River. The survey was funded by the Austrian Ministry for Agriculture, Forestry, Environment and Water Management together with the provincial governments of Lower Austria, Upper Austria and Vienna. The study was carried out in cooperation with the University of Natural Resources and Life Sciences (BOKU) and the Austrian waterway company viadonau. The main aim of the survey was to produce sound data on the transport of plastic particles at two sampling sites.

The Institute of Water Management, Hydrology and Hydraulic Engineering (IWHW) at the University of Natural Resources and Life Sciences adapted two existing techniques used for determining suspended sediment and bed load transport for the new methodology. The method took into account the vertical, horizontal and temporal variability of plastic transport in the flow of the river but requires a truck with a crane to lower the massive construction. The construction allowed for simultaneous skimming of the surface and sampling of a middle layer and the river bed with nets of 500 µm and 250 µm mesh size. Sampling took place at the sites of Aschach (Upper Austria) and Hainburg (Lower Austria) from road bridges and was carried out five times at each site at different discharges. For every sampling point, the plastic transport and concentration (mg/1000.m³) was determined for both microplastic and the total amount of plastic. Hence, values are available for 15 to 21 sampling points within one profile.

Samples were processed in the laboratory and plastic particles were separated manually. The plastic material was identified by means of attenuated total reflection (ATR) infrared spectroscopy and by Fourier transform (FT) Infrared Micro-Spectroscopy in the accredited testing laboratory at Environment Agency Austria. 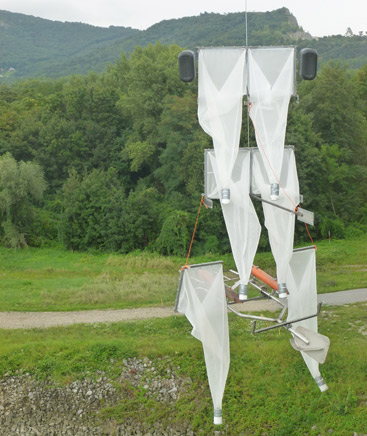 The survey took samples at two sites on the river, Aschach in Upper Austria and Hainburg in Lower Austria, and was carried out five times at each site at different discharges.
© Philipp Hohenblum, Umweltbundesamt

Results of the study. An annual average of the plastic transport load could be calculated amounting to a range of between 6 kg and 66 kg per day for particles smaller than 5 mm and a range of between 7 kg and 161 kg for the total plastic load. The annual load was calculated using the average annual hydrographs of the years 2009 to 2014 for both sites. The annual load for microplastic amounts to < 17 tonnes/year at Hainburg and the total plastic load amounts to < 41 tonnes/year at the same site.

Furthermore, the study revealed that addressing the whole waterbody is of major importance for sampling a river’s cross section, since plastic particles have the properties of suspended particles rather than floating particles. They are encountered in the entire river profile, depending on the hydro-morphological conditions; thus multi-spot sampling is indispensable to acquiring sound results. The majority of the plastic particles consisted of polyethylene and polypropylene. Both compounds account for approximately 80% of global plastic production.

The source of Danube plastic. Around 10% of the particles found in the Danube River were identified as pellets, which unambiguously were attributed to industrial activities such as production processes, conversion and transport. Some 90% of the plastic particles in the Danube River, however, are emitted by diffuse sources, these being littering, fragmentation and transport by wind, run-off from sealed surfaces (roads, parking spaces and residential areas), inappropriate use of products, use of cosmetics, construction activities and so forth. By the same pathways, plastic and microplastic can reach soil, air and other environmental compartments and, once ingested by organisms, move up within the food chain.

Effects of plastic on wildlife. Whereas reports about the hazardous effects of (micro) plastics are scarce in freshwater systems, several reports from marine environments demonstrate different effects. Plastics are often mistaken for food by sea birds and sea turtles and some of them feed plastics to their chicks. Other marine species tend to become entangled in plastic waste and suffer injuries and reduced mobility. The small size of microplastics makes them prone to bioavailability to lower trophic organisms as most species exert limited selectivity between natural and artificial particles. Incorporation of microplastic was observed in the tissue of mussels and inflammatory effects were reported depending on the particles’ shape. And plastics and microplastics contain a number of chemicals to adapt the material’s behaviour, which in turn can be taken up in the organism when ingested. 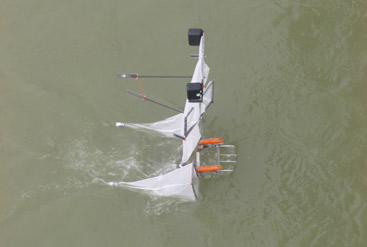 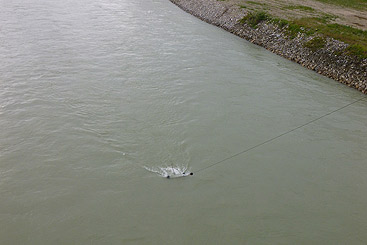 The study revealed that addressing the entire waterbody is important for sampling a river’s cross section, since plastic particles have the properties of suspended particles rather than floating particles. They are encountered in the entire river profile, depending on the hydro-morphological conditions; thus multi-spot sampling is indispensable to acquiring sound results.
© Philipp Hohenblum, Umweltbundesamt

Reducing plastics in Danube waters. The catchment of the Austrian stretch of the Danube River accommodates three plastic production sites and approximately 560 plastic converters. Plastic particles, especially raw material like pellets, waste and dust from treatment processes can be mobilised and emitted to the aquatic environment. Approximately 10% of the plastics found in the river Danube can be attributed to industrial origins. The Austrian Industry together with the Austrian Ministry for Agriculture, Forestry, Environment and Water Management adopted an initiative to reduce plastic pellet losses into the environment by means of technical measures and by raising awareness of employees. Littering, however, is also a societal problem which needs to be tackled at European and Global levels.

Austria initiated several activities to address the topic internationally and to seek international cooperation. The main concerns are the need for definition of the subject, addressing incomparability of data and the need for harmonisation of methods, to address the European Environment Agency and to raise the topic in the next State of the Environment Report as well as to strengthen the cooperation among Europe’s environmental agencies.

Philipp Hohenblum is water and contaminants expert at the Environment Agency Austria (Umweltbundesamt).

Marcel Liedermann is senior scientist at the University of Natural Resources and Life Sciences (BOKU) with research fields in river restoration, sediment transport and monitoring at large rivers.

Next: SWMI – a funny acronym for serious issues