Microorganisms have huge significance for the Danube River

The river and its tributaries receive wastewater from urban areas as wells as farms and pastures and microbiological contamination is an issue that deserves attention throughout the Danube River Basin. To study the extent and the origins of this pollution, the Joint Danube Survey 3 included a comprehensive programme to investigate the microbiological water quality. 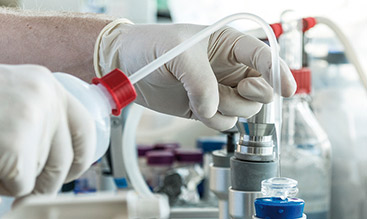 The Joint Danube Survey 3 included microbiological studies focused on assessing the levels and sources of bacteria, as well as bacterial characteristics, such as their resistance to pharmaceutical drugs.
© A. Künzelmann, UFZ

Microorganisms are a key component for the assessment of water quality in rivers. Microbes, especially bacteria, provide many ecosystem services such as breaking down organic matter in the water, carbon storage and nutrient cycling. However, faecal pollution and microbiological contamination have a negative impact on the many ways that we use and rely on water resources, including for drinking water, recreation and industrial applications.

Though so important, microorganisms haven’t received enough attention in the EU Water Framework Directive. So in order to advance knowledge in this underrepresented field, a comprehensive programme covering both aspects of microbiological water quality was a central objective of the Joint Danube Survey 3 (JDS3).

Mapping pollution. Microbial faecal pollution is a significant health hazard as it can contain bacterial, viral and protozoan pathogens from humans or animals. As part of the JDS3, experts created a detailed microbial water quality map of the Danube, along with 16 tributaries and branches, to identify microbial faecal pollution hotspots. Standard faecal indicator bacteria like Escherichia coli and intestinal enterococci are used worldwide for faecal pollution monitoring since they sensitively detect the presence of faecal contamination.

Out of 186 samples taken, 34 were classified as critically polluted, five as strongly polluted and three as excessively polluted. The Arges tributary in Romania and the Russenski Lom branch in Bulgaria were identified as hotspots of excessive pollution. The hotspots of faecal pollution in the Danube were the stretch between Novi Sad and downstream Belgrade in Serbia, downstream Budapest and Dunaföldvar in Hungary, and downstream Zimnicea and Arges in Romania. The site with the highest contamination in the Danube was found in the upper reaches in Kelheim, Germany, downstream of the Rhine–Main–Danube canal, a section with little to moderate pollution generally and state-of-the-art wastewater treatment – a surprise for the JDS3 scientists, for which no definite explanation has been found so far.

However, the results of the JDS3 should be considered a snapshot analysis of microbial faecal pollution. While the data reveals general trends along the Danube, a more detailed analysis is necessary before making definitive site-specific statements. In contrast to the microbiological sampling of the JDS1 and JDS2, samples were taken not only from the middle of the Danube but also at the left and right river banks. Results of the previous surveys indicated that the water in the middle of the river was often unaffected by high concentrations of microbial faecal indicator bacteria entering the Danube from wastewater treatment plants or polluted tributaries.

Tracing microbes to the source. Determining the amount of faecal pollution is important, but knowing its origin is crucial for water management. Determining the sources responsible for pollution is necessary to develop effective measures to counteract the pollution. Microbial source tracking methods can provide the critical information experts need to identify whether the contamination is human or animal in origin.

A new set of genetic faecal markers were applied for microbial source tracking as part of the JDS3. Using this marker set, experts determined that the microbial faecal pollution in the Danube is predominantly human, with animal sources – such as pigs or cattle – playing only a minor role.

Studying self-purification processes. Aside from bacteria, the microbial content is made up of viruses and protozoa. Together these microorganisms provide an important natural service by breaking down organic material in the water, which is often considered to be ‘self-purification’. The bacterial biomass that is built up is consumed to a large extent by protozoa, which themselves are consumed by metazoa (mainly fish and zooplankton), representing an important nutritional source for the entire river ecosystem.

The JDS3 presented the first opportunity to formulate basic hypotheses on self-purification processes and on the development of the natural micro-flora along the whole river. Intriguing results showed that the bacterial community collected in the middle of the Danube was progressively unaffected by external sources, such as wastewater or tributaries, with the increasing width of the river. For example, despite the many purified and un-purified wastewater inputs, the bacterial community in the middle of the river was progressively dominated by small coccoid cells. This may be an adaptation to increasing nutrient deprivation.

The results from the microbiology programme of the JDS3 should prove to be very significant for the Danube River Basin and the water management administrations of the Danube countries. Hopefully, the new insights will serve as a valuable basis for the sustainable management of the microbial water quality of the Danube, and will stimulate more profound and detailed studies in the future.

Alexander Kirschner, of the Medical University Vienna, and Andreas Farnleitner, of the Vienna University of Technology, were leaders of this project in the framework of the Inter-university Cooperation Centre for Water & Health.

Next: Putting new methods to use for the Danube