Historical patterns along the Danube's course

Human activities in the Danube River basin have had a significant impact on the natural environment of the river and consequently have greatly altered the course of the river itself. 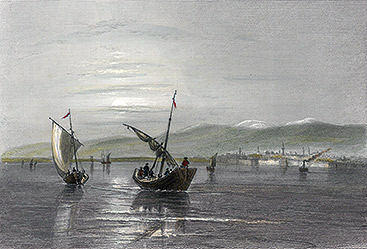 With increasing channel depth and lower flow velocities sailing ships could sail on the Lower Danube, like in Vidin, Bulgaria, around 1840.
Credit: IHG/BOKU Vienna.

“No man ever steps in the same river twice,” wrote the Greek philosopher Heraclitus, “for it’s not the same river and he’s not the same man.” The Danube changes much on its 2857km long journey from the Black Forest to the Black Sea: from source to mouth, it passes 10 countries, 4 capitals and draws water from 19 countries. But even more remarkable is how much the Danube has been changed over the centuries. From agriculture to navigation and flood defence to generating energy, as society has changed so too have the ways in which we have used the river. As a result, the Danube today is a very different river from the one those living in the basin might have stepped into even 150 years ago.

The classical division of the river into the Upper, Middle and Lower Danube, though justified from the standpoint of geological formations, only offers a generalised view of the Danube system. The reality, like the river itself, is more nuanced.

The Upper Danube. In former times, the upper section of the river showed patterns that you would normally expect to find in the lower course of a river, such as the former meander reaches of the German Danube that alternated with sinuous, braiding and canyon sections. Owing to the large alpine tributaries of the Isar and Inn rivers, the Austrian Danube showed a distinct mountainous character with intense river dynamics.

The river featured broad sections – anabranches – that diverted from the main course of the river to rejoin again later; braiding and meandering patterns alternated with narrow canyon sections.

Today, Austrian tributaries contribute 22% to the Danube’s total runoff to the Black Sea at the delta. Before channelisation, the bedload transport of gravel and sand in Vienna probably amounted to about 500,000m3 annually and the suspended load to 6-7 million tonnes. The intense morphological turnover in the alluvial sections largely counteracted the development of distinct natural levees along the river banks.

The Middle Danube. Moving downstream from Austria where the Danube River enters the Pannonian Plain, the channel slope drops significantly from 0.43% to 0.1%. Consequently, the Danube deposited most of its bedload between Bratislava and Komárno/Komárom, where an extensive island delta , (the so-called ‘Small and Large Accumulation Islands’) had formed after the last ice age.

Downstream from the Hungarian Danube bend, the Danube split into two major arms followed by a longer meandering section. In particular, the river developed distinct meander bends and extensive wetlands in what is today the Ramsar-protected area Gemenc in Hungary and the Kopački rit Nature Park in Croatia. Here, gradual deposits increased the lateral river banks, in the form of natural levees, which prolonged the inundation in the floodplain.

In northern Serbia, the hydrological influence of the Alps diminishes with the confluence of the large lowland tributaries of the Tisza and Sava rivers. Downstream from the 100 km-long cataract reach of the Iron Gate where the Danube enters the Wallachian, or Romanian, Plain, the channel slope drops to 0.04%. 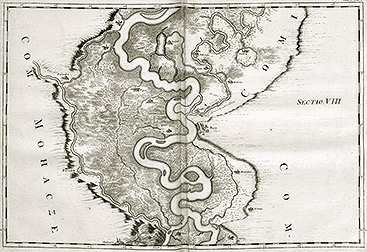 The Lower Danube. The 550km-long main arm of the Danube along the Romanian/Bulgarian border to Silistra was mostly straight to slightly sinuous, but also showed braided and meandering patterns with fine to medium gravel and sand as the main substrate. Braiding intensified downstream of Silistra and long side arms enclosed two large islands – Balta Ialomita and Balta Braila – with extensive wetlands and numerous natural lakes. In addition, the dominant substrate changed to sand, frequently interspersed with mud, silt, loam and clay.

For the last 100km of the river’s course at the Danube Delta, the slope decreases to 0.001%. With numerous side arms, oxbows and natural lakes, the three major Danube channels compose a complex system of branches that divide and reconnect.

Human modifications to river landscapes. River dynamics, sediment transport and river patterns are greatly affected by climate changes and human influences. Therefore, discussing a specific morphological state of a river system requires consideration of the climatic, hydrologic and societal conditions at the time. As the first detailed historical maps originate from the late 18th/early 19th century – a period known as the late phase of the Little Ice Age – the state of the Danube River at that time is usually taken as a reference state to assess later human modifications to the river landscape.

Besides local bank protection measures, the first direct human interventions in the Danube’s morphology were caused by the increasing importance of inland waterway navigation in the late Middle Ages. Later in the 16th century, the first larger dike systems for flood protection were set up in the large floodplains of the Middle and Lower Danube, in what is now Hungary, Serbia, Bulgaria and Romania. By the late 18th century, considerable efforts had been made to install flood protection levees close to urban areas such as Vienna or Bratislava.

The rise of the steamship in 1850 significantly increased river channelisation efforts, and by 1890, mid-flow channelisation was largely accomplished along the Bavarian, Austrian, and shortly thereafter Slovak and Hungarian sections, while the Lower Danube remained less channelised. The channelisation measures were designed mainly for mean flow and higher flows up to one year flood. In the lowland Danube section between Györ and the Iron Gates work focused more on land reclamation and flood protection. 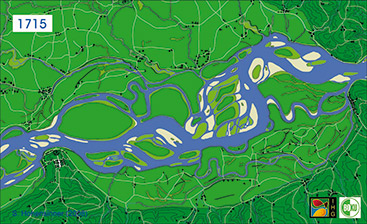 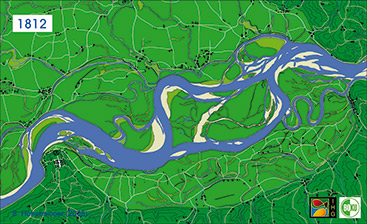 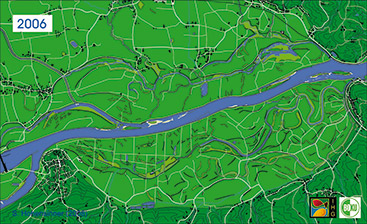 Consequences of a disconnected river. In the alluvial Danube sections, channelisation measures resulted in a typical sequence of changes in river morphology: the loss of flowing side arms and a significant increase in one-side connected backwaters, transformation of the backwater systems to isolated water bodies or dead arms, and terrestrialisation of the remaining water bodies. As a consequence, within 150 years, approximately half of the former water bodies have vanished in alluvial sections of the Upper Danube.

The variety of natural channel patterns along the Danube’s course has changed to a uniform channel design largely independent from site-specific geological conditions. Former river landscapes with complex channel networks are now divided into two clearly distinguishable units: the river and the floodplain.

The heavily truncated river dynamics (erosion, regeneration of habitats) have significantly affected the hydromorphology of the river: it has led to a vertical decoupling between the river (i.e. the water and groundwater table) and the level of the floodplain terrain. Generally, the channelised river sections showed intensive incisions of the channel bottoms soon after regulation.

At the same time, floods have repeatedly deposited fine sediments in the stabilised floodplains, gradually raising the terrain surface. These processes have fostered a drying-out of wetland areas and terrestrialization processes. As a consequence,
along the Upper Danube, the mean depth of the groundwater table of floodplains at mean flow has nearly doubled since the early 19th century.

The effect of hydropower plants. This process has been amplified by the construction of hydropower plants at the Danube and its tributaries. Interrupting the river continuum prevents bedload transport and fosters the retention of suspended load in the impoundments. The almost complete loss of sediment supply from the Upper Danube catchment has increased the sediment deficit for the entire Danube system. Today, ongoing channel incision is a major concern; for example, downstream from Vienna erosion every year is lowering the riverbed annually by 2–3.5 cm, along the Hungarian Danube about 1–3 cm (by as much as 10–17 cm directly downstream from the Gabčíkovo hydropower plant) and at the Lower Danube by 2–3 cm. In addition, construction of hydropower plants hydrologically decoupled large parts of the floodplains from the main channel. Of the nearly 41,600km2 of former floodplains in the early 19th century, only 19% (or 7850 km2) has remained intact in the entire Danube Basin.

Overall, riverine ecosystems of the Danube system are currently characterised by the replacement of dynamic processes with unidirectional developments. These include ongoing incision of the river bed, sedimentation in floodplains, terrestrialisation, and missing regeneration of typical floodplain habitats and their riparian vegetation. (The article is based on the FWF project URBWATER P25796-G18.)

Severin Hohensinner is senior researcher at the Institute of Hydrobiology & Aquatic Ecosystem Management (IHG) at the University of Natural Resources & Life Sciences (BOKU) in Vienna.

Next: Hydromorphology: the Danube perspective