Every six years, the ICPDR holds a Ministerial Meeting to adopt its two management plans. One of the main features of these meetings is that a new and updated ‘Danube Declaration’ is also signed and adopted by those in attendance. This Declaration is the culmination of this vital meeting, bringing together 15 ministers from the ICPDR’s member countries plus the European Union, to extend the objectives of the management plans, and add further political commitments to strengthen the ICPDR’s goals for improving and maintaining the Danube River Basin. 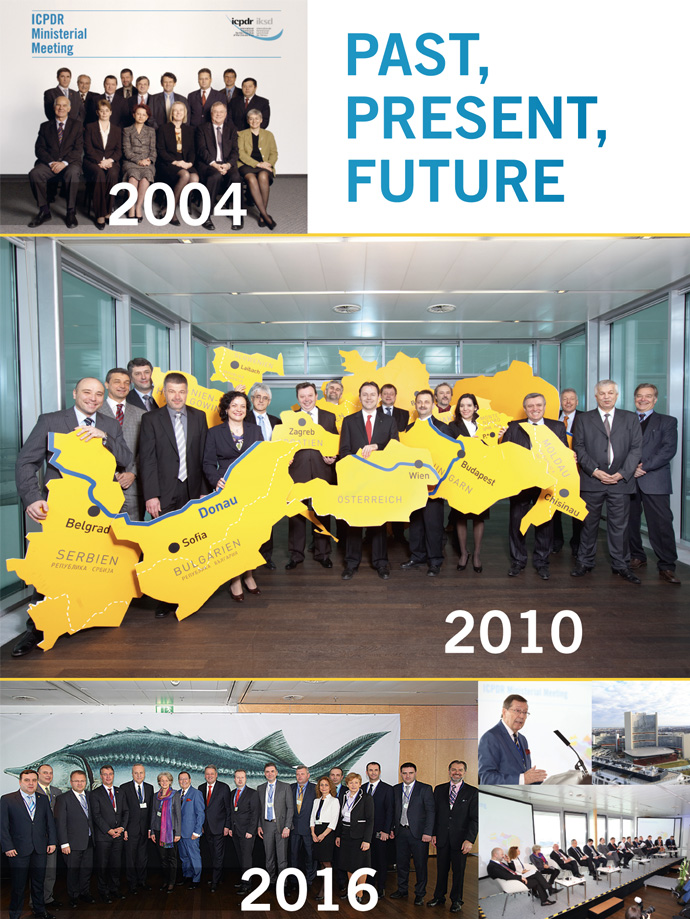 While every Danube Declaration naturally highlights the significance of the ICPDR as a coordinating mechanism within the Danube River Basin for matters of transboundary water management, it also brings new issues, revises old approaches, and generally points the way forward for action.

Past Declarations
Held in Vienna on 13th December 2004, the first ICPDR Ministerial Meeting brought together the signatories of the Danube River Protection Convention to mark the 10th anniversary of its signing. While the meeting largely aimed to highlight successes achieved, the first Danube Declaration was also signed, realigning and reformulating aims for the future. The EU’s Water Framework Directive was already the key driving force behind many new changes in the 2004 Declaration, including the drive to complete a co-ordinated Danube River Basin Management Plan by 2009.

The first declaration was a bold and brave step forward, with ambitious goals such as to “stop by 2015 at the latest, all discharges of untreated wastewater from towns with more than 10,000 inhabitants” and “to reverse the trend of the physical degradation of aquatic ecosystems by returning sections of the Danube and its tributaries to a more natural state”. Reading it 17 years hence, the declaration is the work of a still-young commission. Four member countries – Hungary, Slovakia, Czech Republic, and Slovenia – were only just entering the European Union in 2004, and deeper understandings of the Danubian region as a ‘neighbourhood’ connected by its waters, and precisely what this means, were still in development.

Fast forward to 2010, and the commission was already clearly growing closer and smarter, while Bulgaria and Romania had now joined the EU as member states. “The Danube waters are shared by us all and therefore we also share the responsibility,” said ICPDR President Mitja Bricelj at the meeting in Vienna on 16th February 2010. “We meet to ensure that the resources of the Danube Basin are managed in an environmentally sustainable manner.” The adoption at the meeting of the first Danube River Basin Management Plan put in place concrete measures due by 2015, aiming to further reduce organic and nutrient pollution, plus look at the construction of fish passes, reconnection of wetlands, and other renaturation measures, not to mention to introduce phosphate-free detergents in all markets amongst much else.

By the 3rd Ministerial Meeting held in Vienna in 2016, Croatia was also a member state of the EU, and the ICPDR’s messaging around its goals was becoming slicker and smarter. The meeting launched the ICPDR’s “three pillars” of action: a cleaner, healthier, and safer Danube River Basin. The meeting also saw the adoption of the first Danube Flood Risk Management Plan.

ICPDR President Peter J. Kalas underlined this landmark moment for the ICPDR at the meeting: “As a milestone act in its history, by adopting today two management strategies for the Danube river basin to guide its smart sustainable development during the next 6 years, 14 countries and the European Union expressed a joint commitment for their implementation until 2021 and set the example of tackling global challenges locally."

The most major step forward in 2016 was the consultation process behind the development of the plans. The ICPDR elaborated both with the use of a comprehensive set of public consultation measures, involving environmental NGOs and other key stakeholders, not to mention members of the Danube Public, directly into the process.

To Be Declared…
The next Ministerial Meeting is just around the corner at time of writing. Due to take place in February 2022, the updated Danube Declaration can proudly take a moment to look back on 25 years of achievements. The shared waters of the Danube River Basin are being co-managed by tighter and better-informed transboundary legislation than ever before, counting amongst its overarching achievements thus far, huge improvements to the status of the Black Sea, massive steps in groundwater infrastructure throughout the basin, and a large number of aids for migrating fish amongst much else.

The victory lap must be a short one though, as the mood music throughout Europe is further focusing the attention of the continent onto climate protection, plus climate change adaptation and prevention. The ICPDR is already ahead of the game here, having added ‘Effects of Climate Change’ to its priority list of SWMIs (Significant Water Management Issues) in 2019. (To be precise, the full title of the SWMI is “Effects of climate change (drought, water scarcity, extreme hydrological phenomena and other impacts)”).

The Danube Declaration is preparing our shared river basin for the challenges ahead, envisaging a bold programme for the next – and ever-more essential – six-year period. For example, the Declaration lays out a vision for developing and implementing “sustainable adaptation measures to urgently enhance resilience of aquatic ecosystems to climate change impacts”. It goes further too, aiming to support enhanced “cooperation and exchange of good practices on adaptation measures to climate change impacts”. The Declaration is thus tooling up the Danube River Basin to play its part in a broader European project marking a shift towards bolder future measures throughout the continent at the forefront of a global movement.

Next: Danube Watch 2/2021 - Expect the unexpected: Flood Risk Management in the Danube River Basin and Beyond