When Time Spent in the Water Pans Out: Gold Hunting in the Danube

We already know that the Danube and its tributaries are valuable treasures. But could it be that the Danube is littered with actual treasure?
There is gold in the Danube. From tiny flecks to small grains (and very occasionally larger pieces), hiding in the sediment under certain stretches of the river's waters lies a sprinkling of gold. Let's dive into the story of Danube gold and those who still hunt for it today. 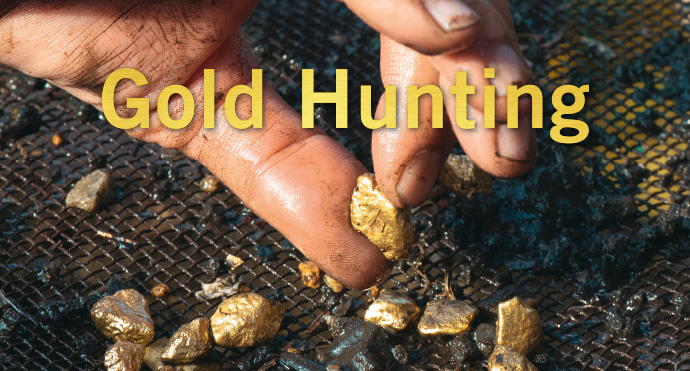 A Golden History
There are stories that the Celts would go to the tributaries of the Danube in search of gold, although the high-water mark of gold gathering in the Danube came under the Romans. Hunting for gold in the river continued thereafter with a method called “panning” (using a large metal pan to agitate gravel from the river bed with a generous amount of water so that the gold particles, being more dense than the other material, settle to the bottom of the pan. The lighter material such as sand, mud and gravel are then washed over the side of the pan, leaving the gold behind). This is a common method used by gold-hunting hobbyists to this day.

Gold-panners were already on historical record around Linz in the 15th century, and the following century would be very productive for gold collecting from the Danube River Basin. By the 18th century, it is estimated that from the Danube main stem and the Inn river, as much as 50 grams of gold was being found in the riverbed annually. Also estimated is that between the 15th and 18th centuries, a total of 20 kilograms of gold was panned out of these sources.

With the colonisation of the Americas by European powers, and the subsequent discovery and mining of gold there, mining gold in the region of the Danube River Basin became ever less profitable. Even panning for gold in the rivers and streams became unprofitable by the 19th century for all but a few private gold-hunters. However, there was still gold to be found, and in 1924 in Austria, 40kg of gold was collected from various sources (mostly mining).

It is still possible to find gold nuggets or grains, although gold specks and dust are far more common these days. The number of larger gold nuggets found around the Danube has decreased over the years, in large part because hobbyist gold-hunters largely use very similar techniques to those historically used over centuries – such as panning – rather than larger-scale methods which would result in gold nuggets, and which have since fallen out of use. 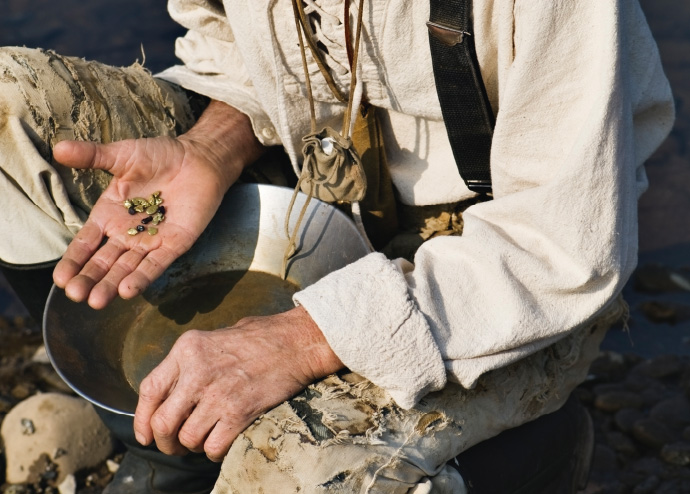 Sources Today
The tributaries of the Danube are especially favoured by modern-day gold-panners. Along the river Enns, from the town of Steyr to where it meets the main arm of the Danube, it is estimated that there is an average of 0.14 grams of gold per ton of gravel. In certain areas though, this concentration could also be over 2 grams per ton. Gold is to be found here largely because its gold-containing banks are being slowly eroded by the Enns, thus allowing the precious metals contained within to enter the river and mix with the sediment below. For the main arm of the Danube itself, it is thought that the origin of its gold may not be from deposits high up in the mountains brought down by streams, but rather from glacial shifts long ago. These shifting glaciers may have exposed and loosened gold deposits which would have fallen out much later. The same may very well be true for the Enns and other Danube tributaries.

How To Pan According to the amateur “professionals”, to pan for gold you need to take a gold-pan to a river or stream – simple so far. Most alpine rivers that flow into the Danube have a “gold-sand area” found at bends in the river where sandy sediment is pushed out of the water by the flow. To find the gold, you must scoop some of the sand into the pan with water and move this mixture around in a circular motion, carefully allowing the sand to spill out over the edges. Because the gold is heavier, it should remain in the pan. Finally, with a horizontal pendulum-motion, the gold dust can be separated from the remaining material.

This is a very simplified idea of what it takes to pan for gold. The work is hard and requires patience and endurance. One gold-panning enthusiast's estimate was that for every gram of gold dust taken out of the Danube and most of its tributaries, 4,000 pans of material would have to be sifted as described above. A regular hobbyist in the Danube River Basin can expertly pan through 20kg of sand and sediment in about one minute, and likely come away with a few gold flakes each time.

The reality is that there is no big win to be had. Weighing the work to pay-out shows that this work is not going to pay the bills; but for the regular hobbyist it is eminently enjoyable. In fact, hunting for gold is not just for dedicated hobbyists, or even just adults. The search for gold in and around the rivers of the Danube Basin is a big attraction for many, and adds to tourism in these areas. Some places offer courses on the history of panning for gold around the Danube as well as how-to lessons on panning itself. With gold-flakes easy to come away with after a little effort, the results are exciting (if not exceptionally valuable) for participants. Add to that the main element that attracts long-time hobbyists – time spent in nature and around the beautiful rivers of the region – and the result is a unique experience.

Author: Jake Friedly
has been the freelance editor of Danube Watch since 2019. He holds a joint-Masters degree in Global Studies from the University of Vienna and Leipzig University. Born in the American west, he has actually tried his hand at panning for gold in former gold-rush territory – where dreams of riches sadly eluded him.

Next: Danube Watch 2/2020 - Climate Ride: Cycling 800 Kilometres Along the Danube to Raise Money for Climate Action