An Interview with Andreas Beckmann 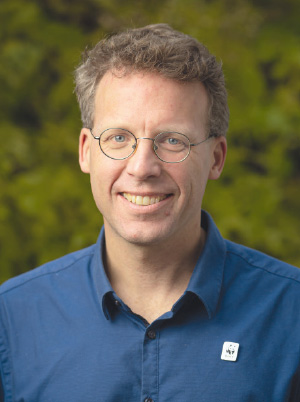 Danube Watch: What is your personal relationship to the Danube, and what would you call your favourite place on the Danube?

I live in Vienna, one of four national capitals on the Danube, and spend a fair amount of my free time in and around the river. I grew up on the upper Mississippi River in the US, so I guess that the habitats, colors, sounds and smells are imprinted on my DNA -- indeed, there are a lot of similarities between the rivers. I love exploring the river and floodplains near Vienna, sunning on gravel banks and listening underwater to the tinkle of stones rolling on the bottom of the river channel. There are of course many other more spectacular parts of the river that are more distant from my home, from the Kopaci Rit, the “Amazon of Europe”, at the confluence of the Drava and the Danube, the islands of the lower Danube with their colonies of pelicans and other species, or the magnificent Danube delta.

Danube Watch: In your position as Regional CEO for WWF - Central and Eastern Europe, what have you seen as the most important challenge facing the region, and how have the challenges facing the Danube changed over time?

There has been some substantial progress -- not too long ago, large sections of the Danube were unswimmable; since then, water quality has substantially improved. Key challenges remain, including those at the focus of the ICPDR’s attention: hydromorphological alterations, organic and nutrient pollution and hazardous substances, not to mention climate change. One sign of progress is the attention now paid to many of these issues.

Many if not all of these challenges come back to how we value and relate to the natural world on which ultimately we all depend for our health, welfare and wellbeing. It was only when we lost the rich fish nurseries of the Danube floodplains for example that we realised what they meant to us in terms of fish production, flood management, water purification and recreation. We need a New Deal for nature -- to re-set our relationship with the natural world on which we all depend.

We have made real progress on addressing potential threats to the river system. When I started working for what was then still the WWF Danube-Carpathian Programme (now “WWF-CEE”), there were EU and national plans to (if I put it provocatively) turn the Danube into a canal, and WWF ran a campaign to “fit the ships to the river, not the river to the ships”. Today -- facilitated by the ICPDR -- we have agreed guidelines and best practice for the development of inland navigation on the Danube, and WWF is working closely with viadonau and other navigation interests to identify and develop practical solutions for transport and environment.

WWF has led or supported wetland restoration at over 30 sites across the Danube basin, most recently through the Living Danube Partnership in cooperation with The Coca-Cola Foundation and ICPDR. It is great to see a growing number of other organisations and authorities doing the same. We have lost 80% of the floodplains of the Danube and its main tributaries -- but at least some of them we can restore. 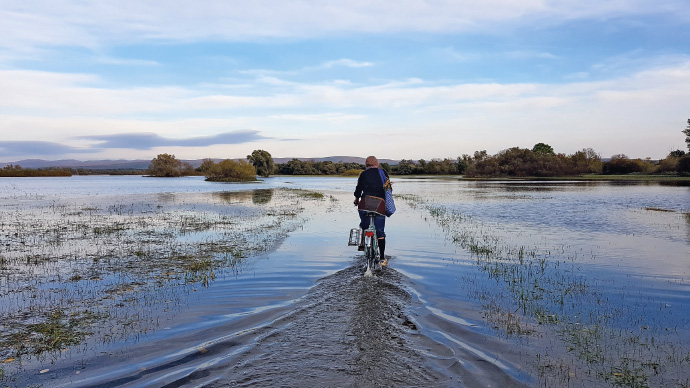 They are called floodplains for a reason...My wife Lena and I love criss-crossing what until recently was off-limits within the folds of the Iron Curtain that for fifty years separated worlds and lives between East and West. We spent the Austrian national holiday (26th October) this year biking - and in places pushing our bikes through thigh-to-waist deep water - through the floodplains of the Morava River in Slovakia on the border with Austria. While the Iron Curtain has been removed, the area is now protected by EU, national and international legislation for the conservation of nature -- the EU's Natura 2000 network of specially protected sites, Zahorie Protected Landscape Area and the Morava-Dyje Ramsar Site.

Danube Watch: What do you consider a highlight of working with the ICPDR and the importance of the WWF-CEE's role as ICPDR observer?

I have found the ICPDR to be a remarkable platform that brings together not only different governments across the world’s most international -- and possibly diverse -- river basin, but also different sectors and stakeholders, from businesses to organisations like my own. The challenges facing us, from nutrient pollution to hydromorphological changes, are by their nature complex and can only be addressed successfully with the active involvement of different stakeholders. The ICPDR has managed very well not only to facilitate communication but also cooperation for tangible results. The ICPDR has played a key role in improving water quality across the Danube and is now central to the efforts to keep Danube sturgeon from extinction. I and my colleagues have appreciated not only the substance but also the spirit of real cooperation there is in the ICPDR.

For us in the WWF, the ICPDR serves as an inspiration and example for basin commissions and stakeholder processes for other river basins across the globe. For this reason, the WWF presented the ICPDR with the Gift to the Earth award in 2019 - WWFäs highest recognition of service to our living planet.

Danube Watch: You have said that we need radically new approaches to the way in which we use natural resources if we are ever going to be able to address climate change and the degradation of ecosystems. What can ordinary people outside of systems of power do to push for and implement these new approaches?

We all can do a lot, starting with the daily choices we make related to our own consumption. Food is a major driver of biodiversity loss across the world; simply changing what we eat can benefit our own health and that of the planet. Housing and transportation are also major drivers of biodiversity loss and climate change. We also can influence those around us and the broader systems in which we exist and operate -- by raising awareness, taking action and giving support, and, not least, voting. The challenges facing us can seem overwhelming, so I think that acting together is important -- not only for impact, but also for solidarity and motivation. Saving the world can be a lot of fun.