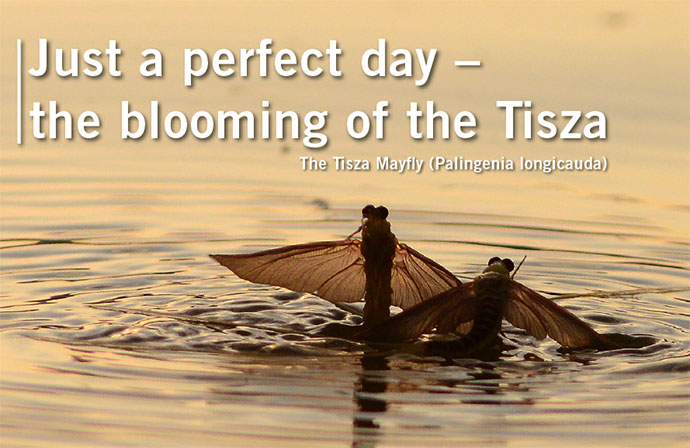 The sunset is amazing. As the strong early-summer sunbeams start to fade into the scarlet-gold tranquillity of the water, a small boat appears from the cover of a willow bush with some curiously silent people on board. The swarm has just started, casting a spell on the drifting visitors, leading them to believe that this will be the last sunset they will ever experience.

And what if this is not just magic? What if this is really the end? Have I been living my life knowing that it could end so soon? Have I finished everything I ever wanted to do and prepared my goodbyes? These are all questions that arise as the floating travellers admire the tiny fairy-like living things, the objects of their interest. Because, for these tiny creatures, this magnificent sunset is the first and the very last they will ever know…

“Tiszavirág” (meaning Tisza flower) is the Hungarian word for the Tisza Mayfly, also known as the long-tailed, or giant mayfly. The Palingenia longicauda is an aquatic insect, which is the largest mayfly of the Ephemeroptera order in Europe. Mayfly entities are spectacular with their mature sizes of 8-12 cm from head to tail and wingspan of 6-7 cm. However, these agile, long winged creatures are more famous for the last, and only day, of their fragile lives. Aristotle was in awe of mayflies, calling them “ephemeral”.

The life cycle of this species is extraordinary. After three years of living and developing as larvae in the muddy riverbed of the Tisza (digging into the underwater walls, usually creating U-shaped, 15 cm deep tunnels), they all hatch simultaneously with just one purpose: reproduction. After remaining hidden underwater for the majority of their lives, they shed their skins on a perfect, early summer day and turn into flying imagoes (male mayflies turn into sub-imagoes first, before shedding their skins for a second time). In the evening, the mature mayflies start a “bridal dance” above the water that lasts several hours.

This wonderful phenomenon is known as “the Blooming of the Tisza” with the Tisza mayflies swarming above the water surface, frequently touching it and triggering millions of miniature waves like tiny raindrops. It occurs, when the meteorological circumstances (temperature, water level, wind, lighting conditions, etc.) are just right for these insects to start fulfilling their main purpose in life. Usually occurring in early to mid-June, the whole event lasts just 3-4 days. 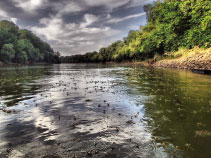 However, for the individual mayfly, the story starts and ends on the same day. They do not even have any organs with which to feed themselves or digest food. They are born with the sole purpose of finding a mate to fulfil their destiny. Directly after mating, male individuals die and fall back down into the water. Females continue to fly for a while until they are exhausted, seeking the location where they themselves emerged from the water, so that they can finally lay their eggs. These eggs are the future of the mayfly population and sink to the bottom of the water, where they start their three years of hiding after hatching into larvae after 45 days.

Tisza mayflies are not only beautiful creatures, but also an important key species in the Tisza ecological system. As bio-indicators, their existence is proof of clean, unpolluted water. They are also extremely sensitive to anthropogenic effects on river morphology, such as the unnatural covering of riverbeds, rising water levels and man-made structures. After fortunately surviving the most severe episode of pollution of the Tisza in 2000 (basically thanks to the low water level during winter), the Tisza Mayfly has become the symbol of protection for a healthy Tisza River.

The species plays a significant role in the aquatic food web. The mayfly larvae, or nymph, is an important food for waterborne secondary consumers, but the main importance of the mayfly in the food chain is provided by their dead bodies drifting on the river, offering tons of nutrients for birds and fish. In the past, fishermen used to collect the insects (both living larvae and dead insects) to use as fishing bait and farmers used the dead insects as fertiliser. Because of the overuse of waters, the species almost vanished from most European rivers in the 20th century, except on the Tisza.

Since 1993, the Tisza Mayfly and its habitats have been protected by law in Hungary. Harming them is an offence that can be punished with heavy fines. Although any water pollution could still decimate their populations, even on the Tisza, this important river species is slowly beginning to appear once again in other rivers, including the Rába, Körös, Bega and Prut. This is due to effective integrated protection measures and sound river basin management.

As the evening turns into night, the wondering boat-guests are left in total silence with their thoughts. Subsistence and reproduction, breeding and decay, birth and death: all in a single day… “The Tisza is a graveyard when it is in bloom” goes the Hungarian song. The river sweeps away the lifeless mayflies, as well as any questions in people’s mind. Sometimes they just wish they could be a mayfly: lightweight, instinctive ephemera which are able to fulfil their purpose in life. They look back on their memories while hearing the sounds of fish feasting. Yes, indeed; it was such a perfect day!

is an outstanding example of international cooperation within the framework of the Interreg Danube Transnational Programme. The project aims inter alia to produce the updated Integrated Tisza River Basin Management Plan. Focusing on water management issues, jointly with the five Tisza-basin countries (involving 17 project partners), one of the project’s main objectives is among others to preserve conditions, which are crucial for the protection and conservation of Tisza Mayfly populations . The insect is the main communicational symbol of JOINTISZA.

Balázs Németh is an environmental engineer. He works at the ICPDR Permanent Secretariat as Technical JOINTISZA Project Staff.

Read more about the project: http://www.interreg-danube.eu/approved-projects/jointisza

Next: Danube Watch 2/2018 - Celebrating 70 years of the Danube Convention