The Danube inspires a river survey in southern Africa

A second Joint Basin Survey is being launched in the Orange- Senqu River Basin in southern Africa this year, based on a relationship between the ICPDR and the Orange-Senqu River Commission and inspired by the Joint Danube Surveys. 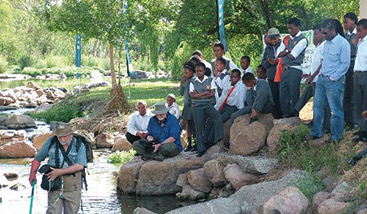 Public events were held as part of the JBS1 to help build awareness of the importance of maintaining river health. School children were among those involved, with the hope that they would continue to monitor and provide information to ORASECOM after the survey.
© ORASECOM

The ICP DR’s Joint Danube Survey is one of the world’s largest river surveys, and its influence has been felt outside the region. The Orange-Senqu River Commission (ORA SEC OM) is currently organising a similar river survey, based on collaboration with the ICP DR.

The relationship between ORASECOM and the ICPDR has been one of collaboration, cooperation and knowledge sharing since the two commissions established a long-term association in 2008. After its first visit to the ICPDR, ORASECOM began planning its first Joint Basin Survey (JBS), inspired by the ICPDR’s experience. At that time, the ICPDR had already conducted two Joint Danube Surveys, and discussions provided the seed of an idea to undertake a similar survey of the Orange- Senqu system.

The first Joint Orange-Senqu River Basinwide Water Resources Quality Survey (JBS1) was conducted from September to November 2010 to establish the baseline conditions against which ORASECOM could measure progress with regard to water resources quality throughout the basin. The ICPDR lent support and expertise to that survey and has expressed willingness to be part of the next survey, illustrating the strong relationship between the two commissions.

Building on experience. ORASECOM decided to conduct the surveys every five years, and the second (JBS2) is planned for 2015, based on lessons learnt from JBS 1. The goal of JBS2 is to contribute towards the achievement of the Commission’s mandate of technically advising the parties on matters relating to the development, utilisation and conservation of the water resources in the river system as well as establishing standardised forms of collecting, processing and disseminating data.

Following this goal, the development objective of JBS 2 is to determine the current state of the quality of the water resources within the Orange-Senqu River System and to measure progress and establish potential ecological trends since the JBS1, during which an ecological baseline was established.

A sampling programme will be drawn based on the conditions established during JBS1, and additional monitoring data between 2010 and 2015 will be used to assess trends in aquatic ecosystem health, chemical and microbial water quality, and survey persistent organic pollutants, polycyclic aromatic hydrocarbons (PAHs), heavy metals and other compounds of concern in the Orange-Senqu River Basin.

The JBS2 and future surveys will benefit ORASECOM and the countries sharing the river basin, water resource managers and the water users in the region and ultimately the public who rely on the river and its ecosystems.

The Orange-Senqu River Basin is the third largest in southern Africa, after the Zambezi and the Congo, and covers a total area of 1,000,000 km2. Four countries – Botswana, Lesotho, Namibia and South Africa – share the Basin, and the river forms the border between South Africa and Namibia in its lower reaches. The effective management of the Orange–Senqu River Basin is, therefore, particularly complex, but is also vital to the economy of the region.

Lenka Thamae is the Executive Secretary of the Orange-Senqu River Commission. Watch.