To find a balance between navigational and environmental interests, project organisers created a stakeholder forum to provide a fact-based and constructive dialogue on a level playing field. 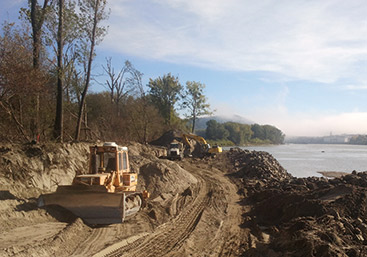 For three years, a stakeholder forum reviewed progress on a project to revitalise shorelines and stabilise the deepening river bed over a stretch of nearly three kilometres downstream of Vienna.
© Tögel/via donau

Finding a balance between stakeholder interests is difficult when those interests seem at odds with one another. But in 2011, when Austrian waterway company viadonau proposed testing various measures to revitalise shorelines and stabilise the river bed over a stretch of nearly 3 kilometres in the national park downstream of Vienna, the World Wildlife Fund (WWF) suggested accompanying these tests with an open dialogue in a stakeholder forum. Harald Pilz and Andrea Trumler, senior consultants at denkstatt, a European consulting company for sustainability issues, were brought in to moderate the dialogue. Pilz speaks to Danube Watch about building mutual understanding between stakeholders.

Danube Watch: When the Stakeholder Forum began three years ago, you were facing hardened positions especially among environmental NG Os. What had gone wrong?

Pilz: Debates about the problems for nature and navigation at the Danube east of Vienna have existed for 20 years or more. When the stakeholder forum started its work in 2012, underlying distrust was still a challenge to overcome. But with time the forum proved to provide a fact-based and constructive dialogue on a level playing field. Questions were answered, information was provided, transparency increased, and recommendations to optimise the test phase were welcome. As a result trust started to grow between the participants.

Danube Watch: Towards the end of the process, it was the navigation representatives that seemed less satisfied than the environmental side. Do you consider the forum a success nonetheless?

Pilz: Mutual understanding of important interests is a factor for success in stakeholder dialogues. In the forum we understood that navigable water depths are a critical factor for economically sustainable navigation. But in the current test section, and also in a previous one, a combination of changes and influences temporarily worsened navigable water depths.

Therefore I can understand that the navigation sector wants to first evaluate the outcomes of the recent tests before new projects are planned. On the other hand, various measures to improve the environmental situation seemed to work: revitalisation of shorelines, environmental optimisation of groynes and the reconnection of an oxbow.

Even if not all of the goals of the test phase were met, all stakeholders and the scientific advisory board underlined that the test enabled a considerable gain of knowledge, which is now needed to solve the remaining challenges at the Danube east of Vienna.

Danube Watch: How will these challenges be addressed in future projects?

Pilz: The stakeholders collected and discussed quite a number of ideas and proposals for future projects. Important issues were, for example, the selection of optimal grain size for stabilising the deepening river bed, the optimal design of groynes, or an integrated bed load management. It is clear that the next project will be based on this knowledge gain, and it will again combine many different measures in an integrated and adaptive approach. Improvement of environmental and nautical conditions will definitely remain coequal goals.

But it was too early to take decisions about concrete elements of the next project. First the outcome of the now completed test has to be evaluated further, and consensus has to be reached among the stakeholders for some future planning parameters. Nevertheless the participants of the forum agreed to a ‘conclusion statement’, which can be downloaded from the forum’s website.

Danube Watch: What was the main reward of the forum?

Pilz: From the viewpoint of neutral moderators we saw a big improvement in the quality and atmosphere of the dialogue. In the end this was also confirmed by an online evaluation survey conducted by viadonau: 97% said that the forum was a suitable instrument to involve stakeholders, 94% agreed that the test phase with its integrative and adaptive approach was valuable, and 92% confirmed the good availability of results and information.

Participants also underlined that future projects should be accompanied by similar dialogue forums, which should continue to aim at win-win solutions for nature and navigation. I personally consider this new cooperative attitude one of the most important
achievements. Based on this common understanding it is now important that the next steps be developed quickly to avoid further erosion of the river bed and to raise the water level in the national park.

Danube Watch: How can other public participation processes learn from this example?

Pilz: It seems that such complex issues can only be solved in an open dialogue between experts and affected stakeholders. Several success factors can support such participatory processes: moderation, documentation and process design should come from an external and neutral provider. All relevant stakeholders should be involved with a balanced number of representatives. Well-structured communication ‘at eye level’, oriented to personal appreciation, will support increasing trust and cooperation. And finally the dialogue should start early enough, when even the planning parameters can still be discussed and influenced.

More information on the forum is available in German at:
www.donau.bmvit.gv.at/projekte
An English version of the Rules of Procedure for the stakeholder forum can be provided by ICPDR on request..

The Bad Deutsch-Altenburg pilot project tested measures to revitalise shorelines and stabilise the deepening river bed over a stretch of nearly 3 kilometres in the national park downstream of Vienna to benefit both navigation and the environment. Starting in early 2012, these measures included applying coarse pebbles to the river bed to address erosion; reducing and re-shaping groynes with more attention given to environmental needs; removing rip rap and remodelling the shoreline including vegetation; and reconnecting an oxbow. To allow stakeholders to contribute to the project, a stakeholder forum was set up, comprising four representatives of environmental organisations, four from the navigation sector, one from the national park and one from the ICPDR. The forum also had a scientific advisory board and was open to
observers.