Violent storms – with the heaviest precipitation in recorded history – swept through South East Europe in May causing record floods that have devastated the region. 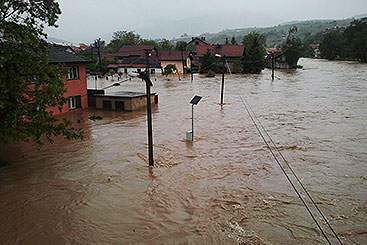 In May, torrential rains caused catastrophic floods that raged through parts of Bosnia and Herzegovina, Croatia and Serbia – the worst floods in living memory. Thousands of people were evacuated and at least 80 people were killed after a week of flooding as rivers burst their banks and swept away roads, bridges and homes.

On May 13, a low-pressure area developed as warm, moist area from the Mediterranean Sea clashed with colder air from the north. Rather than move across the region with the jet stream, the low-pressure system remained over the region, resulting in extremely heavy rain for a couple of days – with some areas receiving a third of their annual total rainfall in just a few days.

The main flooding occurred in the Sava River Basin, which forms a border between Bosnia and Herzegovina and Croatia, then flows into Serbia before joining the Danube at Belgrade. After several days of rainfall, water levels in some right bank tributaries of the Sava River rose suddenly and uncontrollably, flooding towns in their valleys, destroying bridges and infrastructure, and causing landslides. Floods had a particularly devastating impact on the towns and villages along the Bosna River, and the Sava River rose to unrecorded levels breaching levees, and flooding a number of towns.

Serbia and Bosnia and Herzegovina were most seriously affected, with flooding in several major cities and landslides in the mountain regions. Flooding was also seen in eastern Croatia as well as Romania and Bulgaria, where there were numerous victims, and other Danube countries were affected by the storm – Austria, Hungary and Slovakia.

A trend of extreme weather. The region had seen unusually strong rains earlier this spring, so soils were saturated and unable to soak up the excess water. What’s more, extreme weather has been frequent in the region. The 2011–2012 winter was very cold and harsh, while the following summer was extremely hot and dry with record droughts.

“This flood episode was the warning that even worse scenarios may happen in the future,” says Marina Babić Mladenović, Managing Director of the Department of River Engineering at the Jaroslav Černi Institute in Serbia. According to the ICPDR’s Climate Adaptation Strategy for the Danube River Basin, adopted in December 2012, torrential precipitation and widespread droughts will probably be more frequent in the future, the latter mainly in southern and eastern parts of the Danube River Basin.

Bosnia and Herzegovina – swelling rivers.
Most of northern Bosnia was flooded, especially the Bosna River Valley. The Bosna River in central Bosnia completely flooded the cities of Doboj, Zavidovic’i, Šamac and Maglaj – where the town experienced the average rainfall for three months in under 72 hours. Landslides swept away the entire hamlet of Paric’i in Hrasno Donje, a municipality of Kalesija, and also affected the areas of Zeljezno polje in Zepce, Tuzla and other smaller areas in the Sava River Basin. Extremely high water levels at Prud and Kopanice on the Sava River caused overflows and damage to river levees, flooding some protected areas in Posavski canton.

Croatia – ruptured embankments.
Although Croatia was not as badly affected as Serbia or Bosnia and Herzegovina, rivers in the area ruptured embankments, most critically in southern Slavonia. The Sava River breached the embankment near Rajevo Selo and Rac’inovci and evacuations were ordered. Water levels on the Una River hadn’t been that high since 1955, and the river caused flooding in the towns of Hrvatska Kostajnica and Dvor in the Banovina region.

Serbia – devastating floods and landslides.
Only the exceptional efforts of citizens and the army prevented the collapse of the levees near Sabac, and saved the vast lowland from flooding. Many communities were flooded, but the city of Obrenovac was hit hardest by flooding from the Kolubara River. The city was inundated by water several metres deep in the city centre. Krupanj in western Serbia was devastated by torrents and landslides that destroyed dozens of houses and washed out roads there, cutting off the town for three days. The heavy rains in the Drina River Valley caused landslides that cut off villages and closed roads.

Making a slow recovery. The situation in Bosnia and Herzegovina, Croatia and Serbia is slowly stabilising, although warmer weather brings the risk of infectious diseases. Contaminated drinking water is aserious threat, as there are a large number of dead animals in the water and dangerous debris. In addition, floodwaters may have shifted landmines planted during the Balkan wars of the 1990s.

As a result of power outages caused by the floods, Serbia’s electricity production has been cut by 40%, and power supplies have been disrupted in Bosnia and Herzegovina and to a lesser extent in Croatia as well. Transport in the region was interrupted or broken with thousands of roads destroyed. Damage from agricultural losses in the affected areas has yet to be determined, however thousands of livestock perished in the floods.

The official report of the destruction will not be available until officials have been able to make a full assessment; however estimates indicate that over 1.6 million people were affected by the flooding, with estimates of the damage running to more than €1 billion.

Raising public awareness of future flood risks. “One of the main problems is that we only talk about floods after a disaster,” says Almir Prljaca, Head of the Department for Water Management at the Sava River Watershed Agency, Bosnia and Herzegovina.

“There is little understanding still about floods being a natural and unpreventable phenomenon,” says Marijan Babić of Croatian Waters. “I think that it will still take some time before the public realises that there are things that are beyond anybody’s control and beyond anyone’s possible guilt,” says Babić.

The ICPDR’s Action Programme for Sustainable Flood Protection in the Danube River Basin makes public participation in decision-making a cornerstone of successful protection efforts. For more about the ICPDR’s activities focusing on preparation of the Flood Risk Management Plan for the Danube Basin District and the implementation of the EU Floods Directive, please see the article on page 9.

Next: Danube solidarity: united across borders to fight the floods