While their larger sturgeon cousins have become extinct in the Upper Danube in the last century as a result of overfishing and migration barriers, the smallest Danube sturgeon, the sterlet, is just barely holding on. A pilot project in Austria is working to secure self-sustaining sterlet populations for the future. 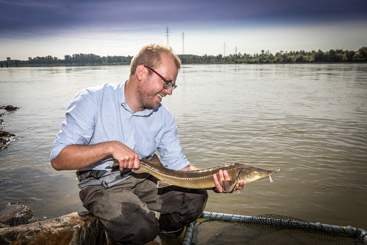 A breeding container will hatch and rear eggs and juveniles with Danube water to induce the fish to ‘imprint’ on the river and use homing behaviour to locate spawning sites.
© PID/Christian Houdek

The sterlet (Acipenser ruthenus) is the smallest of the Danube sturgeons and spends its whole life cycle in freshwater without the need to migrate to the Black Sea. While sterlets are still present in small numbers in the Upper Danube, the Austrian sterlet population is on the brink of extinction with only few specimens remaining. Without the critical efforts of the LIFE-Sterlet project to reintroduce self-sustaining populations of sterlets to the Austrian Danube, they are doomed to disappear from the wild.

The LIFE-Sterlet project was developed within the Danube Sturgeon Task Force (DSTF) Sturgeon 2020 programme. Conceived as a pilot project for the Danube River Basin, the LIFE-Sterlet project combines ex-situ restoration – or efforts outside of natural habitats, such as breeding genetic autochthonous sterlet specimens using state-of-the art techniques – with in-situ efforts, or actions within natural habitats, such as identification and protection of habitats. The project runs from 2015 to 2021 and focuses on building a genetic database, installing an innovative hatchery container, releasing fish into the wild and monitoring the long-term establishment of sterlet populations.

The Challenges for Danube Sturgeons

Within their natural range sturgeons are one of the best indicators for riverine ecosystem health, and their significant decline over the past century poses one of the ultimate challenges for river basin management. Worldwide, many sturgeon species are already considered extinct, highly endangered or vulnerable, as they are extremely sensitive to a broad selection of anthropogenic impacts. Owing to their highly valued caviar and meat they were heavily overfished in the past, which still continues today. Their long generation intervals of up to 20 years and irregular spawning patterns of 2–7 years, make sturgeons extremely sensitive to overexploitation and stocks require a long time to recover.

Obstacles within the river systems pose a serious additional threat to sturgeon stocks as the sturgeon life cycle includes long spawning migration, ranging between several hundred to several thousand of kilometres. Furthermore, juveniles and spawned adults need a wide selection of habitats within the river and must have the ability to migrate downstream after spawning.

While overexploitation and migration barriers are responsible for diminishing stocks worldwide, additional threats cannot be overlooked. As sturgeons can produce fertile offspring through inter-specific hybridisation, the introduction of non-native sturgeon species or genotypes can lead to an outbreeding depression of native stocks. Because of their longevity and their benthic habitat, sturgeons are also sensitive to pollution and the effects of accumulated heavy metals in the sediments, which may lead to organ dysfunctions, especially affecting the gonads and reducing fertility.

Considering all of the pressures on sturgeons, the challenge in managing them is clear. In the case of the Danube this challenge is even further complicated, since the Danube is the most international river system worldwide, extending into territories of 19 countries, with sturgeon stocks also using the coastal areas of three additional countries in the Black Sea region.

Building blocks for breeding. The introduction of non-native species or genotypes can depress native stocks, so genetic analysis is critical to determine if there are differences between various wild sterlet strains and broodstocks in hatcheries. Mother fish will be recruited from wild stocks in the Slovakian Danube downstream of the Gabcikovo dam and genetically characterized prior to propagation. All specimens caught within the project and used for reproduction will be moleculargenetically characterised to ensure that only autochthonous genotypes are used for reproduction. However, genetic variation is vital for sustainable stocking, so the parental generation will be as large as possible to avoid genetic bottlenecks and inbreeding.

Restocking programmes in the past have been largely unsuccessful at producing self-sustaining populations partly because fish born out of natural habitats do not ‘imprint’ on the river and are unable to use homing behaviour to locate spawning sites. To induce this behaviour, a breeding container located in Vienna provides hatching and rearing of eggs and juveniles with Danube water. Rearing the fish under near natural conditions prepares them to be fit for survival in the wild. The container is also a huge asset to education and awareness-raising activities, as it is located in the heart of Vienna and includes a public aquarium with several information panels which are accessible to visitors. This facility is the first of its kind in the Danube River Basin and will serve as a model for future sturgeon protection projects.

Back in the wild, for the long run. Fish will be released into the wild to suitable habitats in three areas: the Wachau valley, the Danube stretch between Vienna and Gabčíkovo, and the Morava on the Austro-Czech–Slovak border. As younger fish adapt more easily to conditions in the wild than fish kept in captivity for a long time, only small fish will be used. The annual release of at least 10,000 juveniles in each project area over five years should lead to the establishment of self-sustaining populations of at least 4,000 reproducing adults in the Danube National Park/Morava system and 2,000 specimens in the Wachau area.

However, to establish long-term, self-sustaining populations it is crucial to identify and protect key habitats. Therefore a number of adult fish will be tagged with transmitters and tags to follow their migrations and document their habitat use over several years. Catch statistics from fishermen will further help monitor the development of the stocks. The compiled data will help define actions necessary to protect these habitats and will be included in the management plan.

The ‘Action plan for conservation of sturgeons “Acipenseridae” in the Danube River Basin’ was developed in 2005 under the umbrella of the Bern Convention and updated eight years later by the Danube Sturgeon Task Force, with support from the EU Strategy for the Danube Region and the ICPDR. The new plan, ‘Sturgeon 2020’, addresses ongoing declines in Danube sturgeon populations with a transboundary strategy that fosters synergies between existing organisations in the Danube River Basin and Black Sea

Thomas Friedrich is the project manager of the LIFE-Sterlet project and a fisheries biologist at the University of Natural Resources and Life Sciences, Vienna.