With We Pass coming to a close, the project focusing on preserving and re-establishing fish migration routes in the Danube River Basin is due to hold its Final Conference online via Zoom on 17th & 18th November 2021. 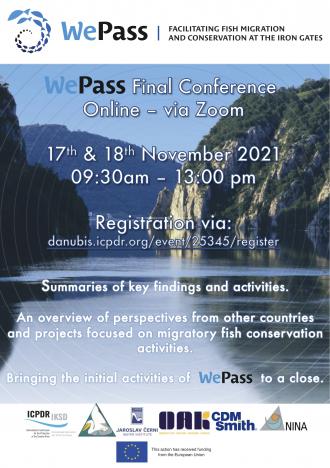 Operated by the ICPDR in cooperation with 5 partners and funded by the EU, We Pass – or to give its full title, “Study on environmental and ecological thematics in the framework of MRS and policy coordination with DG NEAR/ENV: Support for the implementation of the Feasibility Study analysing options for characteristic Danube fish migration at Iron Gate I & II” – has been active since 2019.

The project's aims were largely to focus on the preservation and reestablishment of endangered fish species' migration routes in the Danube River, its tributaries, and specifically at the Iron Gates dams located between Romania and Serbia.

Visit we-pass.org to find out more about the project.

Register for this final event on danubis.icpdr.org/event/25345/register

With that in mind, the We Pass Final Conference isn't only going to hear reports from the project's various Activity Leaders on Data Analysis, Fish Monitoring, Communications, 3D Modelling, and more, but it's also going to hear from some related and similar projects focusing on similar issues.

Spread across two morning sessions, this public Final Conference will report on everything that's happened during We Pass, and pave the way forward for We Pass 2, the followup project due to kick off in the coming period.