At its peak, the Vinča culture along the banks of the Danube, with major advances in writing and farming, was the most sophisticated Neolithic culture in the world. 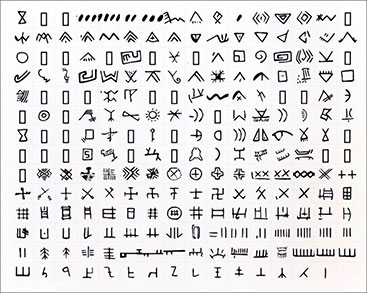 The first known form of a writing system anywhere in the world was created in the Vinča culture, with about 700 characters and symbols, mainly carved in pottery goods. © H. Schiller

Though the Vinča culture has been largely forgotten today, this highly sophisticated, prehistoric culture found along the banks of the Danube River was once the largest civilisation in Europe. The Vinča culture existed long before others appeared in Mesopotamia or Egypt, and many of its innovations – in writing, farming and copper metallurgy – are some of the earliest examples of technological advancements, not just in Europe, but in the world.

In 1908, Serbian archaeologist Miloje Vasić discovered a prehistoric settlement on Belo Brdo Hill close to the village of Vinča, a site located 14 km downstream of Belgrade on the right bank of the Danube River. This Neolithic archaeological culture was named Vinča Culture after the first excavation site. Additional sites were found in Serbia and in neighbouring countries.

It is estimated that this culture began around 7800 – 7500 years ago and lasted more than a thousand years, after which most settlements were destroyed and abandoned. The major historical sites associated with this culture were located at Vinča, Lepenski Vir, Belovode and Vršac.

Life in the Vinča culture. The people of the Vinča- Danube civilisation lived in permanent settlements of hundreds to a few thousands of people – relatively large for communities of the Neolithic era. Houses were made of clay in wattle and daub construction, built on a foundation of stones and gravel and sometimes fixed with mortar.

The use of domesticated animals and the cultivation of crops was common. The Vinča developed the first known cereal agriculture, especially of wheat, oat and barley. A kind of plough, possibly pulled by cattle, was used to cultivate the soil. In addition to farming, villagers relied on hunting, fishing and foraging for sources of food.

Weaving textiles was generally common in the Vinča culture, with the basic material probably flax, though perhaps nettle or wool were also used. Small weights found at some excavation sites give evidence that vertical loom weaving was used, where small weights – made of clay and marked with signs or a number – were placed at the ends to weigh down threads.

Cultural innovations. The first known form of a writing system anywhere in the world was created in the Vinča culture, with about 700 characters and symbols, mainly carved in pottery goods. Some of the signs are figurative, but more than 80% are abstract.

Though the Vinča symbols have not yet been translated, one kind of symbol is related to numbers and was probably used for notations such as marking or indication.

Vinča pottery had a high level of sophistication, and temperatures up to 1000°C were reached in special pottery kilns. They produced kitchen ware, such as plates, cups, bowls, pots and other vessels, as well as high quality fine ceramics probably used for religious rituals. Most ceramics were decorated and, especially on the fine ritual pieces, signs and symbols were engraved sometimes as seals but often as a type of writing. Many female figurines, figures of males and animals, as well as vases, amulets and various altars were found in the excavations. Strange hybrid figurines, such as female statuettes with bird faces, were typical of the Vinča culture.

Evidence shows the Vinča used copper vessels and other copper items, indicating an early copper age – about 1000 years before it appeared in Central Europe. At that time, copper ore could be found in the Balkan Mountains and possibly also in the Carpathians. Evidence of copper smelting was found south-east of Belgrade, at the excavation sites of Rudna Glava and Belovode.

Neolithic neighbours. The Vinča culture was the most highly developed culture in south-east Europe in Neolithic times, however other cultures existed in neighbouring regions with many shared influences. All these Neolithic cultures are generally known under the term ‘Old European Danube Civilisation’.

North of the Vinča were the Lengyel and the Tisza cultures, in the east was the Karanovo culture, and the Hamangia, Cernavoda and the Varna cultures were situated close to the coast of the Black Sea. At a necropolis near the city of Varna, many golden artefacts were found. This ‘Varna Gold Treasure’ was made between 6500 and 6400 BP and is the oldest known gold-smithy in the world.

A disappearing act. What is still not understood about the Vinča is why the culture vanished nearly 6200 years ago. One reason for the culture’s disappearance could be the beginning of the Indo-European migration of the Kurgan people from the eastern steppes to the west. But why was the knowledge of so many cultural advances lost? Some researchers believe that much of that knowledge shifted to Greece and supported the development of Greek culture.

Equally puzzling is how it was possible for such a sophisticated culture to develop more or less isolated in the Danube region. Most likely, the skills developed by the Vinča and other Danube cultures were based on existing knowledge, perhaps with some influence coming from Anatolia or further east. Wherever the influence came from, the innovations of the Vinča culture – in writing, farming, metallurgy – were phenomenal for this Old European Danube Civilisation.

Karl Wachter is a civil engineer and a senior Danube expert from Austria.

Next: Taking the right steps: a followup project for the Danube River Basin Management Plan