ICPDR Danube Watch: Danube leaders discuss the increased need for CO2-neutral energy, the construction of new hydropower plants, minimum ecological requirements and how all of this can be in line with the Danube River Basin Management Plan

Power from the Danube – can it be sustainable?

Danube leaders discuss the increased need for CO2-neutral energy, the construction of new hydropower plants, minimum ecological requirements and how all of this can be in line with the Danube River Basin Management Plan 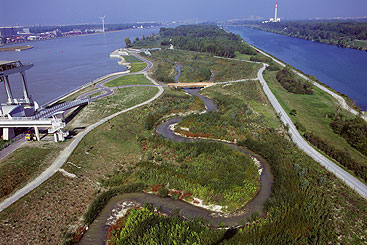 When constructing new hydropower plants, energy companies spend a lot of money to ensure that fish can still overcome the obstacles.

Based on the possible effects of climate change and pressure stemming from the renewable energy sector, hydropower is a hot topic within the European Union as well as around the world. Voices for increased exploitation of hydropower along the rivers are getting louder.

The biannual meeting of the ICPDR Heads of Delegation in Brdo, Slovenia dedicated a special discussion to the current and future situation of hydropower in the Danube River Basin, initiated by the ICPDR Presidency 2010 and chaired by Roko Žarnic´, Minister for Environmental Protection and Spatial Planning of Slovenia.

Nearly all Danube countries depend on hydropower. The upper part of the Danube is ideal for building hydropower plants due to the river‘s natural gradient. A total of 59 dams have been built along the Danube’s first 1,000 kilometres – from the source down to Gabcikovo – many of them decades ago. This means that the Upper Danube is interrupted every 16 km on average.

Around 60% of the electricity generated in Austria yearly originates from hydropower – 20% produced along the Danube itself. In Slovakia, hydropower counts for about 16% of the energy mix; 11% derives from the hydropower plan Gabcikovo. The largest hydropower dam and reservoir system along the Danube is located at the 117-km-long Djerdap Gorge (Iron Gate Dam I and II). This peak operation system consists of two dams, operated jointly by Serbia and Romania, producing about 37 % of the total energy used in Serbia and 27 % in Romania.

Even more power from the water. Due to pressure from EU policies responding to the possible effects of climate change and the strong dependence on imported electricity, construction of new hydropower plants is currently under discussion or in planning phases on the Sava, Mura, Drava and the Tisza Rivers, as well as on the Danube itself between Romania and Bulgaria.

These effects work against the spirit of the EU Water Framework Directive and the goals set out in the Danube River Basin Management Plan, which was accepted by all Danube Countries in February this year. “We need to find a compromise between the goals set out by the EU Renewable Energy Directive and the EU water policy”, says Žarnic´. “Securing the sustainability of hydropower is one of the main challenges in the implementation of the EU Water Framework Directive”.

Best planning, construction and operation – but not everywhere. Best practises for planning, construction and operation of plants can minimise their negative effects, as seen at the Freudenau Hydropower Plant, Austria. Especially on the Upper Danube, millions of Euros are being spent and will be spent in the coming years to re-fit old-fashioned plants for the future, as requested by the WFD. Unfortunately, however, these standards are not state of the art in plants throughout the basin. And even if all ecological standards are met by a plant, hydropower potential alone can not be seen as a green light for its exploitation.

“We need to look at each hydropower project individually as we have high-sensitive, sensitive and nonsensitive areas”, says Otto Pirker from VGB Power Tech. “Public interests need to be respected: energy production or environmental protection.”

Small plants – smaller footprints? Another key problem is the increased and subsidised construction of small hydropower plants. “There is a general conception that a small hydropower plant causes small impacts”, says Jian-hua Meng, hydropower expert from WWF International, “but this is not true. Moreover, there is a substantial cumulative impact.”

Facing the problems these smaller plants cause for river ecology requires new thinking.. “First of all we should focus on sites of catchment areas with high hydropower potential. Secondly we should use from these sites only those with low impacts on ecology. Maybe it is even better to upgrade existing hydropower plants instead of new buildings or to build one large plant instead of constructing hundreds of small ones along all rivers – we need to be realistic and creative with solutions”, says Fritz Holzwarth, Head of the German Delegation to the ICPDR.

Dialogue to reach solutions. Coming years will show if and how hydropower can be produced sustainably. The ICPDR is ready to open this chapter with stakeholders from the energy sector to discuss, explore and define solutions which respect both the increased demand of CO2-neutral energy and the protection of rivers and habitats. Clearly, duplication with other efforts at the national or on the EU-level should be avoided, and the ICPDR will take into account ongoing discussions and suggested solutions.

As a first step all relevant documents on hydropower will be assembled and an overview on the current situation of the hydropower use in the Danube River Basin will be prepared by autumn. “Working with the navigation sector to develop the ‘Joint Statement on Inland Navigation and Environmental Protection’ was a very good experience”, says Philip Weller, ICPDR Executive Secretary. “We are positive that the dialogue with the energy sector will also lead to a fruitful and moreover sustainable outcome.”

non-DaM hyDropoWer – the solution for the future?

One of the most exciting innovations in hydropower doesn’t use dams. Instead, ‘hydrokinetic’ turbines capture energy from the flow of water in rivers, estuaries and ocean currents. Hydrokinetic turbines look just like underwater wind turbines built on the riverbed or hanging upside down from barges anchored in the river. Nondam hydropower could have a lower impact than dam-based hydropower and other conventional generation technologies, with no significant engineering challenges to install or operate the turbines in rivers.

In January 2010, the Pike Energy consulting firm estimated that if the European Union and the United States continue to increase incentives for non-carbon energy, there could be about 3,000 megawatts of river flow turbines installed by 2025.

Jasmine Bachmann is the Executive Editor of Danube Watch.

Next: EU Commissioner for Environment looks at challenges in the Danube