Vienna, 4 September 2007 - The ICPDR has won the Australian $300,000 (approx. 180,000 Euro) International Thiess Riverprize 2007 for excellence in water management in the Danube River Basin. The announcement was made today, in Brisbane, Australia, during a special award ceremony at the 10th annual International Riversymposium held 3-6 September 2007. 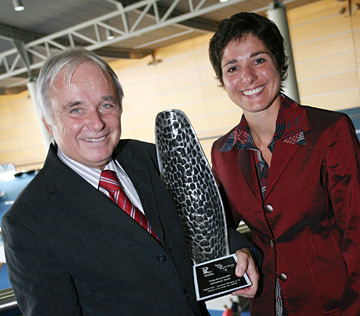 The ICPDR’s main goal is to implement the ‘Danube River Protection Convention’, signed by 13 Danube countries and the European Union (EU), by promoting and coordinating sustainable and equitable water management.

The world-renowned Danube River is 2,780 km long. The Danube Basin, including the Danube River and its many tributaries, covers 801,463 sq km. Home to some 81 million people, it includes parts of 19 countries making it the world’s most international river basin – and a major challenge for transboundary cooperation.

“The 45-year long Soviet era left much of the Danube with terrible environmental legacies such as toxic waste and destructive farming practices,” said ICPDR Executive Secretary Philip Weller. “That was preceded by over a century of river damming and channelling with negative impacts for water quality and quantity, and for valuable habitats and threatened species.”

In response, the ICPDR, since its establishment in 1998, has catalyzed international cooperation for corrective action. Examples include the building of sewage treatment plants for municipal waste, changes to environmental policies and the restoration of floodplain habitat. “Many Danube countries are not in the EU,” said Mr. Weller. “However, all agreed to cooperate to meet strict EU water protection laws, showing their commitment to applying integrated river basin management.” This included joint efforts to develop the first-ever comprehensive report on the Danube environment by 2004, and current efforts to produce the first Danube River Basin Management Plan by 2009.

Other signs of excellence in water management include the development of optimal technologies to collect and assess information. This includes a network of water monitoring and sampling stations, research ships testing pollution and a transboundary warning system for accidents.

ICPDR efforts raise awareness of and celebrate the Danube through the coordination of ‘Danube Day’ (celebrated annually on 29 June), the popular ‘Danube Watch’ magazine and the ‘Danube Box’ educational toolkit for teachers. Public participation in ICPDR activities is assured through the provision of observer status to key major stakeholders at ICPDR forums, from industry to NGOs. Partnerships have been developed with businesses to support ICPDR projects while improving the environmental management of business operations. And all countries recently committed to implementing the ICPDR’s action programme against the rising impacts from floods.

“The ICPDR is a worldwide model for cooperation in river basin management,” said Romanian State Secretary for Water, and ICPDR President 2007 Lucia Ana Varga. “Through the forum created by the ICPDR, the Danube countries are restoring some of the Danube’s lost treasures, preventing future plans from causing more damage and increasing international cooperation. As recently as this February, they helped to get the EU and environment ministers from all of the 16 countries sharing the Danube and Black Sea region to adopt a new ‘Declaration on the Enhancement of Cooperation’ for water management.”

Launched in 1999, the International Thiess Riverprize has evolved into one of the most highly regarded and richest international water management awards. “The Riverprize identifies the world’s best practices in water management, preservation and restoration,” said Martin Albrecht, Chair of the International Riverfoundation. “It also offers winners the unique opportunity to put their river rescue ideas into action to save our most important waterways.”