A century ago, six species of sturgeon were native to the Danube River Basin. Today, five of them are critically endangered and one is already extinct, and action plans to conserve their habitats
cannot be postponed. 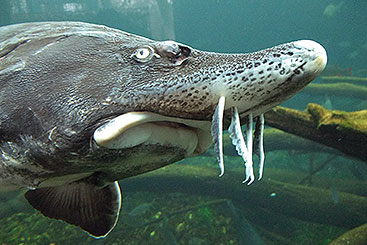 Sturgeons are a flagship species, dependent on an interlinked network of habitats that provide them with suitable conditions for feeding, migration and spawning. By preserving the habitats and dynamics that satisfy the needs of this species, it is possible to protect the living spaces of many more species.

Originating 200 million years ago, sturgeons are ancient migratory fish which today are close to extinction. They can grow up to six metres long and can live to be a hundred years old. Sturgeons have outlasted the dinosaurs, but today are among the most threatened species on the IUCN red list.

Sturgeons depend on an interlinked network of habitats that provide them with suitable conditions for feeding, migrating and spawning. Sturgeons are faithful to the same spawning sites year after year and are therefore very sensitive to habitat changes. River engineering changes – for hydropower, navigation, irrigation and flood protection – have seriously affected sturgeon populations because of the loss of suitable habitats in the Danube River Basin.

Indicators of ecosystem health. For the ICPDR, sturgeons are a flagship species – species that have complex demands on their habitats. They are excellent indicators of a range of improvements, such as river morphology, chemical water quality and permeability. By preserving the habitats and dynamics that satisfy the needs of this species, it is possible to protect the living spaces of many more species.

The EU Strategy for the Danube Region specifically mentions sturgeon conservation as a target in Priority Area 6 (Biodiversity). “If the sturgeons can obtain a long-term high quality status for their life so that they can recover in the Danube, then this will show that the overall environmental and ecological state of the river system is well because they have such high demands on the ecological status,” says Florian Ballnus of the Bavarian State Ministry of the Environment and Public Health, and Priority Area Coordinator 6 for the EU Strategy for the Danube Region.

The Sturgeon Action Plan was adopted in 2005 under the Bern Convention. The Plan calls for:

Fighting sediment transport and pollution. Hydropower dams block the migratory routes of fish, and destroy important sturgeon habitats because stones are kept behind the dams. This causes problems not just for sturgeons, but also for navigation as well because of the resulting sediment. “You can dredge it here and you will have it ten kilometres downstream because it’s so fine. Recovering the sediment balance along the Danube will help the sturgeons and the environment, and it will also help navigation,” says Cristina Sandu, Coordinator of the Danube Sturgeon Task Force at the Institute of Biology Bucharest, Romanian Academy.

In addition, sturgeons are very sensitive to low oxygen, pollution and other poor water conditions, especially during spawning and their early life stages. Later on, they can accumulate high loads of contaminants because of their long lifespan. Pollution such as excessive nutrients from sewage and agricultural fertilisers, substances known as endocrine disrupters which may decrease fertility, heavy metals and persistent organic chemicals affect not just sturgeons, but their food sources – not to mention other animals and humans too.

Filling knowledge gaps. One of the biggest difficulties in protecting sturgeons is that much information about key habitats is still missing. “There are still huge gaps in knowledge on the exact location and the characteristics of the most important life cycle habitats for the remaining five species of the Danube River,” says Ralf Reinartz, consultant for fisheries and aquatic ecology in Germany.

The narrow channels of the Danube Delta are extremely susceptible to the erosion of riverbanks, which alters sturgeon habitats.

Some notable progress in identifying wintering habitats on the Borcea and Bala branches of the Danube have come as part of the ongoing programme Instrument for Structural Policies for Pre-Accession (ISPA) 1 construction project. Although the environmental impact assessment for the project has been criticised, monitoring revealed previously unknown habitats on these branches. “It was used by sturgeons long in the past, and we were able to demonstrate that today it is used as a passage route and a wintering place for long-distance migrants,” says Radu Suciu, head of the Sturgeon Research Group at the Danube Delta National Institute.

In addition, sturgeons spend most of their lives in the Black Sea but little is known about what happens to them there. Though conservation efforts focus on the Danube River Basin now, sturgeon experts agree that activities in the future will have to include the Black Sea.

Raising public awareness. The most critical knowledge missing may be the public’s awareness of these endangered species. A recent Bulgarian survey revealed that the public have little understanding of the threats sturgeon face. “Very few people knew that the sturgeon is a fish, and very, very few of those knew that it is an endangered species,” says Stoyan Mihov, freshwater expert at WWF Bulgaria.

Through activities like Danube Day, countries across the region are uniting to raise awareness for sturgeons and take action to protect their habitats. The theme of this year’s Danube Day celebrations will be, ‘Get active for the sturgeons’, and the celebrations will highlight the threats sturgeons face and the efforts being made across the region to protect them.

“The sturgeons are as old as the Danube and they are unique in that they are witnesses to the existence of the river,” says Suciu. “By understanding and protecting these species, we are protecting our history, and our future.” 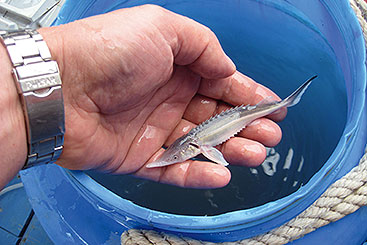 In January 2012, The Danube Sturgeon Task Force was established by a group of sturgeon experts, NGO delegates, representatives of the ICPDR and national governments. The Task Force aims to coordinate and foster the conservation of highly endangered native sturgeon species in the Danube River Basin and the Black Sea by promoting the implementation of the Program ‘STURGEON 2020’. Key measures encompass habitat protection, restoration of migration routes, supportive stocking programmes, economic alternatives to sturgeon fishery, fighting the caviar black market, ecological education, harmonisation of legislation and law enforcement.

The DSTF is open to participants who are actively involved in sturgeon conservation and want to contribute to the Sturgeon 2020 programme. Both ICPDR and the EU Strategy for the Danube Region (Priority Area 6 Biodiversity) are among the main partners and so are NGOs such as WWF and IAD as well as renowned scientists. For more information on the activities and strategies of the Danube Sturgeon Task Force, please visit www.dstf.eu.

Irene Lucius is the Head of Policy at the WWF Danube-Carpathian
programme.

Next: A high price for survival: fighting the illegal caviartrade in wild sturgeon