Imagine being able to improve flood protection, reduce pollution, recharge groundwater and boost the diversity of plant and animal life all at the same time… Riverine wetlands can make it possible. 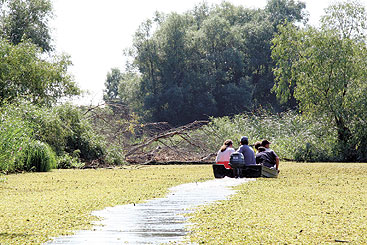 Wetlands have much to offer, such as flood protection, groundwater recharge, pollution reduction and nutrient retention. But it is the wide variety of plant and animal life that make them such a treasure.

“Wetlands are the most important part of an aquatic ecosystem”, says Christine Bratrich, head of WWF’s Danube/Freshwater Programme. Wetlands serve as a link between the land and the water, and provide a range of services that benefit all aspects of river activities.

Wetlands act as a sponge and aid in flood protection and groundwater recharge, by absorbing water during the wet season and slowly releasing it during the dry season. Wetlands also help keep the river clean, by acting as a filtration system, trapping nutrients, like phosphorus and nitrogen, as well as sediments.

Finally, wetlands are bursting with life and provide a variety of different habitats, especially as they serve as spawning grounds for fish and nesting grounds for migratory birds.

In the last 150 years, however, the need to create farmland, generate electricity and make water transport easier has changed the dynamics of the river. Today, more then 80% of the historical flood plain areas in the Danube River Basin has been lost, according to the ICPDR’s Danube Basin Analysis. The loss of wetlands means the loss of the functions they perform. “We disconnected most of the wetlands or converted them to agricultural land”, says Thomas Hein, who leads a working group at the Wasser Cluster Lunz and served as Assistant Professor at the Institute of Hydrobiology and Aquatic Ecosystem Management at the University for Natural Resources in Vienna, Austria. “It means that the landscape hasn’t the possibility to buffer, to retain water, to retain nutrients, transport processes are dominating.”

A vision of reconnection. The EU Water Framework Directive (WFD) is a driving force in water management, and all countries within the Danube River Basin have committed to it, whether they are legally required to or not. While the WFD does not explicitly mention wetlands, they can help achieve the goals of reaching the ‘good ecological status’ of all waters by 2015 based on the principles of integrated river basin management. “If we talk about integrated river basin management and we forget about wetlands then the whole thing would fail in a way”, says Bratrich.

The ICPDR’s vision is to reconnect and restore approximately 330,000 hectares of wetlands in 17 sites along the Danube and its tributaries by 2015. As a first step, the ICPDR will ask Danube countries to provide a list of national measures to reconnect and restore wetlands. The Danube River Basin Management Plan will include a list of national projects related to reconnecting former floodplains, breaching dikes or mitigating their effects, significantly changing the maintenance of dams or dikes and restoring respective habitats.

“This is definitely something where the ICPDR is playing a very good role. I hope the national governments of the contracting parties will follow”, says Bratrich. “To set a vision and goals to reconnect wetland systems within the frame of the WFD, and to have the ICPDR and especially someone like Birgit Vogel [Technical Expert on River Basin Management] in there who understands the system, is really a benefit for the 80 million people living in the catchment”, says Bratrich.

Working on wetlands. The ICPDR’s vision was introduced at the Wetlands Workshop, held in Tulcea, Romania, in April 2007. The workshop was organised by the UNDP/GEF Danube Regional Project (DRP) and co-hosted by the Danube Delta Institute. The workshop brought together people from varying backgrounds, and presented the challenges on the basinwide level. “If you work with the Danube you should have a more or less complete view of the Danube as a whole”, says Carl Manzano, Director of the Donau-Auen National Park in Austria.

The workshop identified problems from the past that create obstacles in reconnecting and restoring wetlands. It can sometimes be difficult to get local residents to accept wetlands; many locals only want protection from floods. Wetlands often have multiple managing authorities, causing problems in communication. Finally, there are frequently competing needs for water, such as for fishing or drinking water, which means there are competing management strategies.

The workshop participants also identified what is needed to reconnect and restore wetlands: inventories of wetlands, high level support backed up by legislation, better understanding of how wetlands work, clear objectives for wetlands management and success stories to promote the benefits of wetlands restoration.

In recent years, the Donau-Auen National Park in Austria has built cooperation with partners of protected areas in Slovakia, Hungary, Croatia and Serbia. At the Wetlands Workshop in Tulcea, Romania, in April, there was strong agreement to strengthen this cooperation and create a network of the larger protected areas along the Danube and areas of the main tributaries. “We are all protected areas along a big river, a navigable river, a river where flood protection is of course a big topic, where preservation and restoration of riverine forests and meadows is a topic”, says Manzano, Director of the Donau-Auen National Park in Austria.

The protected area partners developed the ‘Tulcea Declaration’, as an appeal for creating such a network. “Now it’s an idea, an appeal, but it has to become reality”, says Manzano.

Tailoring guidance to individual wetlands. Interest in using wetlands to retain nutrients was behind reparation of the ‘Technical Guidance on Nutrient Retention Capacities of Wetlands’ published by the DRP. The document shows case studies emphasising the nutrient retention capability of wetlands and provides a guideline for implementing this function.

The document will help fill several knowledge gaps that exist pertaining to wetlands. “It should help – not to operate with general numbers and finally end up with a large deviation from the reality of your wetlands”, says Hein, one of the document’s authors. “Wetlands are different but you can categorise them, you can evaluate the exchange and then you have a proper idea of the potential role your wetland can play.” The guidance document and the technical report can be found at:
http://www.undp-drp.org/drp/activities_4-3_monitoring_of_wetlands.html

Bringing wetlands back into the picture. The largest international and most ambitious wetlands restoration project takes place in the Lower Danube Wetlands. In 2000, environment ministers from Bulgaria, Romania, Moldova and Ukraine signed the Lower Danube Green Corridor Declaration, recognising the need and responsibility to protect and manage more than 1,000,000 hectares of protected areas including Ramsar sites, UNESCO Biosphere Reserves, a UN World Heritage Site and national and nature parks.

The restoration projects will form a green corridor that will stretch to the Black Sea.

Understanding wetlands better. The Danube Delta National Institute in Tulcea, Romania, was created in 1970 to carry out research for the Danube Delta Biosphere Reserve and wetlands of national and international importance for biodiversity conservation and sustainable development. The institute’s expertise and potential has been recognised at the European level and it was designated in 2000 a Centre of Excellence for Deltas and Wetlands within the European Commission’s Centres of Excellence Programme.

Currently, the Institute is undertaking the huge task of mapping the entire Danube floodplain. Using Light Detection and Ranging (LIDAR), a remote sensing system, the institute is collecting topographic data which will be used to create flooding models. So far, 70% of the Danube floodplain has been covered. A socio-economic investigation accompanies the research to investigate the economic-environmental connection. “These two components must create one defence line for villages”, says Iulian Nichersu, of the Danube Delta Institute, “and to create a plan for the Environment Ministry”.

Letting the river do the work. At the Donau-Auen National Park in Austria, the dynamics of the flowing stream are still active. The Danube flows 36 km through the 9,300 hectare National Park, and its waters flood the area creating the extreme range of conditions needed for a diversity of habitats. “Though the Danube is an international waterway, in the National Park we think of the river as the heart of the park”, says Manzano. “The water discharges, changing water tables, the connection between groundwater and the river itself – all of this is very important.”

Since the creation of the national park, commercial activities have stopped and the area highlights natural as opposed to constructed wetlands. “Our experience from the National Park area is that the easier, the more uncontrolled these openings are – this exchange of water – the more efficient in the long run it could be, efficient in terms of sustainability”, says Hein.

The Ramsar Convention on Wetlands came into force in 1975 and is an important tool for global wetland protection. It is the world’s oldest international conservation treaty, with the aim of sustainable use of wetlands for mankind without disturbing the natural properties of the ecosystem.

The Ramsar List of Wetlands of International Importance, commonly called Ramsar sites, not only recognise the world‘s most important wetlands, but are also an effective tool to help countries meet their goals of sustainability. About 80 wetlands of the Danube River Basin are included in the list of Ramsar sites.

Next: Cooperation blooms in the Tisza River Basin