Where does all the plastic
come from and how does
it move in the Danube?
by Iris Kempter, viadonau

A lthough plastic has many advantages, it has become a global environmental hazard. It is estimated that around 80% of plastic polluting the world’s oceans is transported via rivers. However, sources and pathways of plastic in the rivers and its environmental impacts remain widely unclear. The project PlasticFreeDanube, with a duration of 3.5. years (1 Oct, 2017 – 31 Mar, 2021) and funded by the EU-programme Interreg SK-AT, focused on macro-plastic waste (> 5 mm) in and along the Danube river between Vienna in Austria and the hydropower plant Gabčíkovo in Slovakia as well as parts of its riparian area. The overall aim of the project was to establish a scientifically sound knowledge-base as well as a methodological approach on plastic waste in and along the river in terms of entrance points, quantities, transport patterns and environmental threats. Awareness-raising and the derivation of possible measures against pollution were further goals.

Sorting analyses & material flow
In order to determine the sources and origin of plastic pollution in and along the Danube, 2,000 kg of collected plastic waste was sorted and analysed. The collections took place mainly under the coordination of the Donau-Auen National Park and with the help of volunteers. The results show that the composition of the found plastic waste varies depending on the collection area: In the waste from litter on the Danube Island, a lot of sanitary waste (especially cleaning tissues) and packaging was found. Samples from the hydropower plant Freudenau contained higher amounts of plastic waste from households, sport and leisure activities as well as waste from ships (ropes, buoys). Washed-up waste on the riverbanks was characterised mainly by plastic from households and packaging, but also by a large portion of foamed plastic. In the hinterland, a high portion of PET drink bottles and foamed plastic was found. A newly developed sampling and sorting protocol helps to compare the results and should act as a manual for other projects in the future. Pollutants are often not found at the source of emission. This is especially true for plastic deposits in the area of the Donau-Auen National Park. The low weight of plastics favours drifting by wind and transport with rainwater over long distances. In order to derive appropriate prevention measures, it is important to know the origin of plastic waste and how it enters the Danube. With the help of a material flow analysis (MFA) this can be shown quantitatively. It shows sources, pollution hotspots and entry and discharge points of plastic waste into the Danube.

Chemical analyses
Leaching experiments were done in order to evaluate the possible hazardous materials leaching from the plastic waste and the generation of microplastics. Samples of the collected plastic waste were placed into glass bottles containing 80 ml of ultra-pure water and left there for approximately one month to shake in at 560 rotations per minute (r/min). Since the quite high rotation generates some shear force through vortexes, the generation of microplastics was examined as well. For the evaluation of microplastic, generation micro-FTIR and optical microscopy were used. The decanted water was analysed by gas chromatography coupled with mass spectrometry in order to detect the leached organic substances. The concentrations of detected organic substances were well below some hazardous limits. Chemical analysis concerning metals detected in the case of PET bottles showed an elevated concentration of antimony of approximately 200 μg/l at the limit value of 5 µg/l for drinking water.

Plastic transport in the Danube
On the one hand, plastics can be carried into the river via tributaries such as the Danube Canal in Vienna. On the other hand, they can also get caught in the grates of the hydropower plants. To better estimate these input and output paths, measurements were carried out in the Danube downstream of the Freudenau power plant and at the end of the Danube Canal from the Freudenau harbour bridge using specifically developed trap nets. The nets covered three different depths (near the surface, in the middle of the water column and near the bottom) and had mesh sizes of 0.25 mm (250 µm), 0.5 mm (500 µm), 2.4 mm and 8 mm, respectively. At the Freudenau harbour bridge, the entire transverse profile was covered with five perpendiculars, at each of which sampling was carried out for half an hour. Additionally, GPS tracer were used for the tracking of single macro plastic pieces in the Danube. 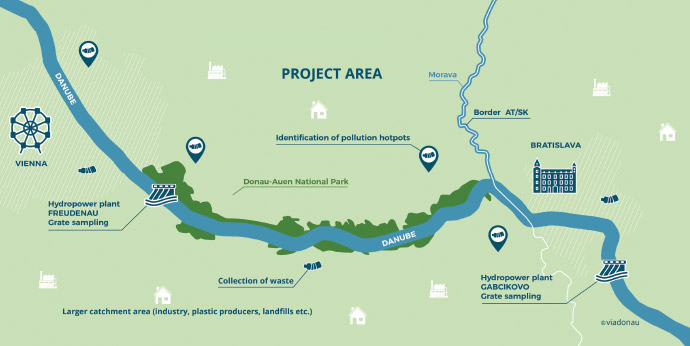 Accumulation zones – 3D hydrodynamic modelling
Within the framework of the project, an attempt is made to characterise various macroplastic accumulation zones along the Danube east of Vienna on the basis of hydrodynamic-numerical modelling. Using a specially developed tool for particle tracking, the complexity of the flow fields near the surface has already been demonstrated with respect to hydrological conditions and bank structure. In addition, a large-scale model was created with the software RSim-2D to analyse the bank near accumulation as well as in the flood plain.

In order to interpret the models, the simulation results were linked with data from field surveys and statistical analysis of water level and discharge conditions. During monitoring activities in the field, accumulation areas near the bank were found along the shore line of frequently occurring water levels. For this reason, hydrological series of Danube flows were used, with the most frequent water levels being determined for spring and summer or autumn and winter, depending on the hydrological regime. With the water levels from the numerical simulations, areas with a high accumulation potential could thus be determined and quantified.

Further simulations carried out in the project deal with the influence of hydraulic structures and vegetation on the accumulation behaviour at different discharges. The knowledge gained should help to define targeted collection areas and to design artificial accumulation areas.

Awareness raising & capacity building
Raising public awareness of the problem of plastic waste in the nature in general, and in rivers in particular, is the key to sustainable behaviour changes. Therefore, information events and workshops were organised, and informational materials for schools and other educational institutions were developed. All documents and reports can be downloaded on the digital communication and information platform launched by the project. The platform will continue to exist after the end of the project:
plasticfreeconnected.com

Moreover, an action plan for the management of plastic waste will be derived from the outcomes of the project and workshops with various stakeholders and decision makers.

The project was implemented by partners from Austria (BOKU - University of Natural Resources and Life Sciences, Vienna, viadonau, Donau-Auen National Park) and Slovakia (RepaNet o.z., Polymer Institute SAS) and with assistance from various strategic partners, e.g. the Austrian Federal Ministry for Climate Action and the ICPDR.