The Danube - a river’s lure

The queen of Europe’s rivers, the Danube is rich in history and enveloped in an aura of legend and myth, drawing visitors from all over the world. 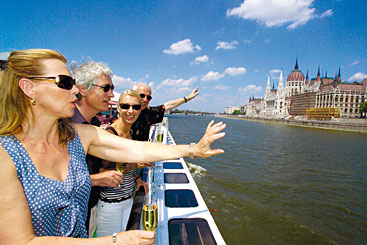 The Danube Tourist Commission selected ‘The Danube Moves’ as its annual theme for 2008. Past themes have included ‘The Danube and europe’, ‘Man, Myths and Tales’, ‘The Musical Danube’, ‘Danube landscapes’, ‘Danube Delights’ and ‘Royal Danube – River of kings’.

TOURISM ON THE DANUBE RIVER

Trends in tourism point to steady increases in cruise traffic, while the day excursion segment remains stable. However, on board the Twin City Liner (Vienna-Bratislava) 108,000 passengers were counted last year, and in 2008 two ships are operating between Bratislava and Vienna.

From the mountains of the Black Forest, the Danube makes its way through cliffs and surges down wild and romantic gorges to flow by mighty castles, palaces and monasteries, framed by the enchanting landscapes and Baroque splendour along its banks. The German poet Friedrich Hölderlin called the Danube a refreshing, melodious river, sometimes foaming with high spirits, at other times dreaming serenely. No other river in the entire world has inspired so many poets, musicians and painters to create masterpieces; art and music accompany the route of the great river until the melody reaches a gentle climax in a rustling sea of reeds: the Danube Delta, one of the last paradises for man and nature.

For millennia one of Europe’s most important waterborne trade routes, the Danube continues to play this role today: it makes up
part of the European Union’s Corridor VII that traverses the continent. Sailing the Danube has also become increasingly popular with holidaymakers. Little wonder since a cruise on the great river is a unique and unforgettable experience. Over 113 cruise liners now regularly ply the Danube between Passau and Budapest, and as far downstream as the delta.

Tourism in the Danube River basin.
The Danube Tourist Commission was founded in 1970 at a time when no one could foresee the fall of the Iron Curtain, and it can thus justly claim to be the first tourism organisation in the world to have spanned the great political and ideological divide. Today member countries can look back on over 30 years’ experience of working together in a remarkably unbureaucratic manner: Germany, Austria, Slovakia, Hungary, Croatia, Serbia and Romania are all represented through their national tourism organisations – and the Republic of Moldova has participated since 2007 as an observer.

Sharing the treasures of the region. The Danube Tourist Commission operates as a marketing and information platform supporting the tourism branch on and along the river through targeted marketing activities.

A centrepiece of the Danube Tourist Commission’s activities since 1982 has been the Danube Travel Mart. Since 2007, the event – renamed Danube Salon – is held in conjunction with the new actb – Austrian and Central European Travel Business (formerly atb) in Vienna: January 25–27, 2009. In 2007 actb welcomed over 380 exhibitors, including 45 from the Danube Tourist Commission’s member countries as well as 1000 buyers and trade journalists from the main international source markets.

The Danube Tourist Commission assists in the preparation of publications, film and television productions, and also issues a series of handy annual guides to cruises, excursion ships, yachting, cultural events on the Danube and Main-Danube Canal as well as information on the Danube bicycle trail. The awardwinning website www.danube-river.org records at least 18,000 visitors monthly and the website www. danubesalesmanual.com is the first international online Danube River Sales Guide featuring a recently expanded range of cultural events and travel information from all the countries along the river.

Part of a Danube family. The Danube Tourist Commission has been an observer to the ICPDR since 2004, and has also endeavoured to work together with important regional and national Danube organisations. The Danube Tourist Commission collaborates with the Institute for the Danube and Central Europe, the UNESCO working group Vienna and the Danube Cooperation Process and the Working Community of Danubian Regions, as well as maintaining an association with the EU Corridor VII (Danube)/Tina Vienna Transport Strategies.

The Danube Tourist Commission cooperates with the ICPDR to promote celebrations along the whole river for Danube Day on June 29. Additionally, to mark the start of the shipping season, Danube Navigation Day is celebrated with cross-border festivities every year on the last Sunday in April: April 26, 2009. The Danube Tourist Commission helped to develop this marketing event together with other organizations.

A river at the heart of Europe. Due to joint efforts, the Danube has emerged in recent years as one of Europe’s leading tourist destinations. Interest in the countries of south-eastern Europe and unhindered navigation along the entire length of the river down to the Danube delta have given a major boost to the region’s tourism generating steadily rising cruise ship and passenger numbers.

The Danube also boasts one of the continent‘s most beautiful bicycle trails. The Danube trail closely parallels the river‘s course and passes through an unbelievable variety of changing scenery, intact nature, architectural treasures, and some of central Europe‘s most interesting and beautiful cities. Away from heavily travelled roads cyclists relax and enjoy the sport safely, unhindered by motor traffic.

Ambitious cyclists can cycle along the trail from Germany through Austria and Slovakia to Hungary, getting to know the countries and their peoples up close. And when they need a break from pedalling, cyclists can simply load their bicycles onto a ship – bikes are carried free of charge on most Danube liners – and relax on deck while the scenery slips by. Cruise guests can also make land excursions by bike, as rentals are available at many locations.

The Danube is navigable for large ships from kilometre 2415 at Kelheim. The 171-kilometre Main-Danube Canal, which opened to shipping in 1992 and links the river with the Rhine, makes possible cruises across the breadth of the continent from Amsterdam on the North Sea to Sulina on the Black Sea. On October 7, 2005 the Novi Sad pontoon bridge has finally been dismantled, giving again free passage to cruises through the Iron Gates and as far as the Danube delta.

With the accession of Romania and Bulgaria to the European Union in 2007, the Danube is a European inland waterway in every sense. The most important development along the Danube in 2008 is the extension of the Schengen area. On December 21, 2007 passport controls were eliminated in Vienna, Bratislava or Budapest, and the southern Hungarian city of Mohács now functions as the Schengen border crossing point for all ships cruising upstream and downstream.

Whether travelling along the Danube by road, rail or bicycle, or sailing aboard a gleaming cruise liner, no one can resist the lure of this ‘Queen of Rivers’ and the harmony of river and scenery.

Gerhard Skoff is the President of the Danube Tourist Commission.

Next: Setting sail: Slovenia, the Danube and the EU Presidency