A good team was the most important requirement to meet the goals of the ambitious Danube monitoring programme and bring the fleet of ships to a successful finish in Tulcea. 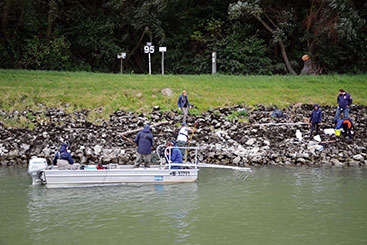 Small boats were used to transfer experts to monitoring sites along the shore. © Liska/ICPDR

It was 12 August 2013. The tropical heat that Central Europe had been suffering from a week before had turned into a mild, pleasant summer. In Regensburg Harbour, however, for everyone involved in the Joint Danube Survey (JDS3) the heat was on.

The JDS3 monitoring cruise took place from 13 August to 26 September 2013 with the spirit of cooperation and support predetermining the whole survey. A good team was the most important prerequisite to fulfil the JDS3’s ambitious programme of analyses and observations to investigate water, sediments, suspended particulate matter, sediments and biota. This required collecting diverse samples from each sampling site. To complete the entire sampling plan within the time given it was essential that the activities were well planned and orchestrated and then fine-tuned during the initial sampling performances.

Cruising the Danube waters. The JDS3 fleet was assembled thanks to Serbia (providing the laboratory vessel Argus), Romania (providing the supporting ship Istros) and Austria (financing the fish survey ship Wien). In addition, five small boats were deployed from the JDS3 ships at each sampling site to transfer the monitoring experts where needed. Macrophyte researcher Igor Stankovič was brought to shore to trawl three kilometres on left and right banks to assess plant occurrences and diversity. He was accompanied by Jarmila Makovinska sampling phytobenthos. The boat was also needed to bring Patrick Leitner, Thomas Huber and Claudia Nagy to the shore to perform the multihabitat sampling of benthic macroinvertebrates.

Another small boat was used for in-thefield physico-chemical analyses carried out by Florentina Dumitrache and also to collect water and sediment samples for chemical analysis, zooplankton sampling and bottom dredging for benthic macroinvertebrates on five cross-sectional profiles carried out by Bela Csanyi, Jozsef Szekeres and Momir Paunovic. The third boat was operated by Peter Matok, Jan Busovsky and Radoslav Cuban to make a detailed hydromorphological characterisation of the sampling site and to collect river bed material and perform measurements of flow velocity, river discharge, suspended sediment and water level slope and fluctuation. Phytoplankton sampling was carried out by Martin Dokulil and Ulrich Donabaum directly from the Argus.

The fourth boat was used by the fish team (Vinzenz Bammer, Michael Schabuss, Horst Zornig and Lachezar Zlatev Pehlivanov) to catch fish species, by electrofishing, in a particular littoral habitat day and night. The river bottom was sampled for fish from the fifth boat by Agnes Irma Gyorgy, Zoltán Szaloky and Andras Weiperth, who used an electrified bottom trawler net. Most importantly, all of the fish sampled were returned alive back to the water after all necessary data had been collected. 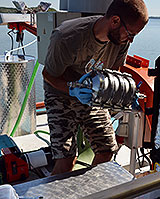 The monitoring programme for the JDS3 was an ambitious schedule of analyses and observations to investigate water, sediments, suspended particulate matter, sediments and biota all along the river.
© Liska/ICPDR

Processing samples back on board. While those teams monitored from the smaller boats, a number of scientists accomplished their tasks from the ships. Mary Craciun operated the continuous flow centrifuge pumping several thousands of litres of river water at each Danube site to collect a few hundreds of grams of suspended solids, which were then distributed to laboratories for hazardous substances analysis. Together with Peter Tarabek, Mary also processed the collected sediments to obtain the fraction necessary for subsequent analysis. Peter’s main activity was to operate the passive sampler and the mobile large-volume extraction unit containing a sequence of sorbents for the optimised extraction of a broad scale of contaminants so that their presence in the Danube water could be checked.

The samples prepared by Mary and Peter are now being analysed by leading laboratories in the Danube countries, from the NORMAN network of European reference laboratories for monitoring of emerging environmental pollutants as well as by the European Commission’s Joint Reference Centre laboratories to obtain highly detailed information on the pollution of the Danube by chemical substances and to assess toxicity of individual samples. During the survey NORMAN experts Björn Deutschmann and Sandor Sipos prepared fish samples for follow up chemical analyses and bioassay investigations and Tobias Schulze assisted with large volume sampling.

The experts in microbiology Georg H. Reischer, Stefan Jakwerth and Stoimir Kolarevic also worked on board determining microbial water quality and securing samples for DNA based – large scale microbial faecal sourcetracking, which makes it possible to identify the sources of microbial faecal pollution in watersheds. In addition, Stoimir analysed fish blood samples with a rapid bioassay method in his night shifts.

Leadership and coordination. Well-orchestrated cooperation was vital throughout the entire survey. The detailed planning and management of daily activities was the responsibility of the Core Team Leader Bela Csanyi and his deputy Momir Paunovic. While both are leading experts in aquatic biology, it was their long-term experience with Danube monitoring and surveys – Bela was the Core Team Leader during JDS2 – that made them the best candidates to lead the third survey. Using an adaptive management approach to ensure harmony between the navigation requirements and the scientific goals, they successfully accomplished the survey’s tasks and brought the fleet to its final destination in Tulcea.

The logistical and organisational back-up during the monitoring cruise was provided by the JDS3 Technical Coordinator Jaroslav Slobodnik, who had served the same role during both previous Joint Danube Surveys. Finalising the monitoring expedition has been a key step towards producing the JDS3 final report in autumn 2014. Until then, the samples collected during the survey are being analysed by the JDS3 laboratories, which will provide the results next spring.

To learn more about the JDS3 and read the updates made during the survey, please visit: www.danubesurvey.org

Igor Liska is the Technical Expert for Water Quality at the ICPDR Secretariat and JDS3 Project Manager.

Next: A hydropower balancing act