The Danube River Protection Convention was signed in Bulgaria in 1994, and the country holds the presidency for this anniversary year. Throughout the years of collaboration under the ICPDR, Bulgaria and other countries in the region have found win-win solutions to shared challenges. 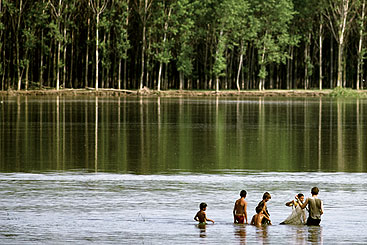 People have lived on the banks of the Danube for centuries, and notable traces of early civilisations in Bulgaria include the Neolithic people of the Vinca culture, who created the oldest known examples of proto-writing. Today, the Bulgarian share of the Danube River Basin is home to over 3.5 million people, nearly half of the country’s total population.

The Danube River Protection Convention, signed in Sofia on 29 June 1994, presented the opportunity for Bulgaria to reinforce its responsibility to manage joint waters together with the other Danube Basin countries. This responsibility was built on long experience in water management and driven by the diverse hydrological conditions of Bulgaria.

Balancing needs with natural treasures. Despite a total of 300 rivers flowing through Bulgaria, water resources in the country are scarce. However, the Bulgarian part of the Danube River Basin is rich in ground waters and possesses considerable operational capacity assessed to be worth a total of 70 cubic metres per second. These waters are the most important water supply source for north-eastern Bulgaria. And protecting the waters of the region secures them not just for the people who depend on them, but for wildlife as well.

The section of the Danube shared between Bulgaria and Romania is the richest in biodiversity. It is the last part of the river free of dams or other river partition facilities to prevent the unconstrained development of ecosystems. For the same reason, it is only at this lower section of the river where four sturgeon species can still be found – although highly endangered – and where they can still reproduce.

The Danube is the largest river in Bulgaria with a length of 470 kilometres, and forms the border with Romania. However, the Danube is not a barrier; in fact it has helped to foster cooperation and integration – not just through the ICPDR. In 2007, Bulgaria and Romania joined the European Union, harmonising water management through the ICPDR.

Bulgaria was a founding member of the ICPDR and a host to its creation. Over the past 20 years, the country has shown itself to be a reliable partner to all countries, demonstrating responsibility for the Danube River and the Black Sea. And this relationship between Bulgaria and its partners within the ICPDR family has been mutually advantageous. Bulgaria has been able to put its experiences in the ICPDR to good use for its journey towards European integration. Most importantly, however, working together under the Danube River Protection Convention has benefitted the water bodies and all of the people of the Danube River Basin. Bulgaria congratulates everyone behind this effort and looks forward to supporting them for years to come.