Austria
The “blue” Danube and the ICPDR

Austria is not only the country where the ‘Blue Danube’ waltz originates from, adding a lively musical identity to the otherwise rather smooth river, it is also home to the ICPDR Secretariat. There are good reasons for both these facts. 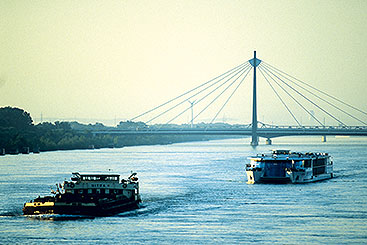 Nourished by numerous Alpine rivers, the Danube evolves from a medium-sized river to the mighty Danube that has shaped landscape and culture of Austria for centuries and inspired Johann Strauss to create his most famous waltz.

Austria is home to people who hold environmental protection in high regard, and typical for a rather small country by international measures, Austria is also a strong supporter of transnational cooperation. Therefore, it is no wonder that Austria has been among the strongest advocates for the ICPDR ever since it was established in 1994. Austria was the first country to provide a president, to provide civil servants as first staff members and today, Austria is still host to the ICPDR’s Secretariat.

Austrians take great pride in the quality of their water and many of the country’s best-known attractions are directly linked to its water resources. Think of the the Wachau River Valley – a UNESCO World Heritage Site and outstanding example of a fluvial and cultural landscape bordered by mountains; the Donau-Auen National Park – a protected floodplain area; the Thayatal National Park – an impressive protected area on the Thaya/Dyje River; and Neusiedler See (Fertő-tó) – also a UNESCO World Heritage Site consisting of a large, shallow lake, more than half of which is dominated by reeds.

An obligation to the river. Such a wealth of water-related resources comes with great responsibilites, and they touch on many different uses. More than 40% of Austria’s Danube Basin is used for agriculture, settlements and infrastructure, which has led to organic, nutrient and hazardous substance pollution. With all available valley floor space developed, there has been a marked impact on rivers, which along many stretches were straightened as early systems are also used for hydroelectric power generation (an important source of energy for the country), inland navigation and as receiving waters for effluents and drinking water supply.

Responsibility involves taking action to remediate impacts. Important efforts have been made and are still under way to reduce impacts on rivers further: Austria was one of the first EU countries in full compliance with the EU Urban Wastewater Treatment Directive, and Austria is a frontrunner in reconciling river ecology with hydropower generation, flood protection efforts and navigation.

The ICPDR provides a platform for coordinating efforts to improve the chemical and ecological quality of water bodies, and to manage flood risks sustainably in the Danube River Basin. In addition, the ICPDR is also an efficient international mechanism to engage in a dialogue with stakeholders from different sectors to balance conflicting needs of the environment on one side and society and the economy on the other.

Austria is strongly involved with the Danube and the ICPDR. As a country, it has both given to and taken from the river and the commission looking after its health. Austria wishes both the Danube River Basin and the ICPDR with all its contracting parties and people behind them as much prosperity in the future as it has had in the past 20 years since the signing of the convention.

Next: Czech Republic - Creating a connection to the Danube Basin