Vienna, 8th October 2020 - The Partnership of the Year Award goes to Coca-Cola for its Living Danube Partnership with WWF-CEE and the International Commission for the Protection of the Danube River. The award was presented at today’s online Reuters Responsible Business Awards 2020. 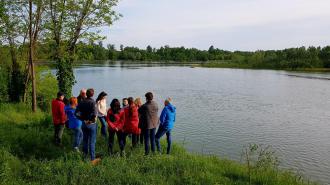 The award was given for the Living Danube Partnership’s unique model of cross-sectoral cooperation, bringing together the public, private and non-profit sectors, including the political framework of the International Commission for the Protection of the Danube River (ICPDR) and its member countries and the EU across the Danube basin; the resources and capabilities of the Coca-Cola Foundation and system; and the capacity, know-how, and facilitation of WWF-CEE. The judges particularly noted the long-term commitment and complex approach of the partnership, which is now in its seventh year and includes river and wetland restoration activities as well as education and awareness raising across six countries of the world’s most international river basin.

According to ICPDR Executive Secretary Ivan Zavadzsky, the Living Danube Partnership "has already produced impressive results, and should be observed as an exemplary project in the bringing together of partners, sectors, and interests to take direct positive action in the Danube River Basin. From the ICPDR standpoint, this Partnership has been an invaluable asset to raising awareness, plus educational and stakeholder involvement programmes in recent years. Above all though, the LDP's ability to harness partners' different strengths to implement the Joint Programme of Measures within the Danube River Basin Management Plan (namely regarding one of the four Significant Water Management Issues in the plan: hydro-morphological alterations) is a model approach for future conservation projects around the world.

“The Living Danube Partnership is I think unique in our region of Central and Southeastern Europe,” said Andreas Beckmann, Regional CEO of WWF Central and Eastern Europe (WWF-CEE). “I know of no comparable initiative in terms of size, scope, impact and duration. The flexibility of the partnership based on shared long-term objectives and trust has enabled us to achieve far more than originally planned -- leveraging nearly €20 million in support for wetland restoration initiatives across our region.”

Restoration activities -- involving everything from breaching dykes, re-opening side-arms and removing unused weirs -- are on track to deliver 6,829 hectares (i.e. 7,422 football pitches) of wetlands restored by next year. Through communications and engagement including social and traditional media as well as a mobile exhibit and tour, the Partnership has reached more than 80,000 people directly and over 54 million people indirectly with a message promoting an appreciation of our rivers and wetlands and the valuable goods and services they provide us.

"This unique partnership has shown what is possible when companies and conservationists work together on a long-term strategy to tackle our growing freshwater challenges”, said Stuart Orr, Global Practice Leader Freshwater, WWF-International. “The Living Danube Partnership has transformed degraded wetlands, while simultaneously driving a new narrative around the real values of the river - highlighting why a healthy Danube is critical to people and nature and how businesses can help to restore it to health. Hopefully, this transformative partnership will be replicated far and wide."

Wetlands contribute in no small way to our quality of life -- indeed, to our very survival. Few people realise the range of products and services that freshwater habitats like wetlands provide: not only food such as fish but also water purification, flood management, recreation, and biodiversity. But wetlands are among the most threatened habitats worldwide -- 80% of floodplains of the Danube River and its main tributaries have been lost.

(pictured: Coca-Cola’s Sofia Kilifi picks up the Partnership of the Year Award for the Living Danube Partnership)

Fortunately, there is a growing appreciation of rivers and wetlands, and strong government commitments to not only conserve what remains but also restore what we have lost. The Living Danube Partnership has sought to help turn those commitments into reality. In cooperation with dozens of local stakeholders, from landowners and -users to relevant authorities, the partnership has promoted and inspired a string of initiatives demonstrating how to achieve wetland and floodplain restoration.