On 27-28 March 2018, Belgrade payed host to the ICPDR Climate Change Adaptation Workshop. The ICPDR workshop was hosted by the Institute for the Development of Water Resources - "Jaroslav Cerni" The gathering included 80 participants from Danube countries, the International Sava River Basin Commission, the Carpathian Convention, the Danube Commission, the ICPDR Secretariat, the European Commission, GWP CEE, UNEP, the EUSDR and WWF who all contributed valuable input and advice. 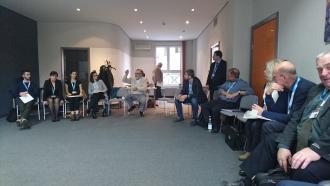 The Climate Change workshop not only presented the outcomes of the REVISION AND UPDATE OF THE DANUBE STUDY “Integrating and editing new scientific results in climate change research and the resulting impacts on water availability to revise the existing adaptation strategies in the Danube River basin”, but also sought input for the update/revision of the ICPDR Climate Change Adaptation Strategy and included lively and interactive break-out sessions involving detailed discussions on impacts and fields of action. The outcome of these engaging interactions led to important recommendations and set of potential adaptation measures to build next steps and resilience towards a revised strategy by December 2018.

The meeting focused on the update of the “Strategy on Adaptation to Climate Change.” The first version was triggered by the implementation of the Water Framework Directive (WFD) and the Floods Directive (FD) and initiated by the Danube Ministerial Conference in 2010, and developed by the ICPDR as one of the first major transboundary river basins worldwide. This first version was based on an elaborate study undertaken by the Ludwig-Maximillians-University in Munich (LMU), which summarized all of the relevant findings about climate change in the Danube River Basin. From this data and analysis the ICPDR developed the “Strategy on Adaptation to climate Change” in 2012.

Compared to the scientific study finalised in 2012, several conclusions were drawn from the updated scientific study prepared and finalised by the LMU in February 2018. Firstly, most of the findings regarding climate change effects have become more certain. This applies in particular for seasonality in precipitation, run-off, droughts, floods, low flows, agriculture, forestry and ecosystems. Secondly, the Climate change in the Danube River Basin is affecting all regions and all fields, the differences in impacts between the sub-catchments will increase. Thirdly, dry regions such as the Lower Danube River Basin will get drier, wet regions, such as the alpine areas, will get wetter, but high variability within landscapes. Fourthly, seasonality of precipitation will increase, with a strong decrease of summer precipitation especially in the South-Eastern part of the Danube River Basin. Lastly, weather and hydrological extremes (droughts, heat, floods) will increase with higher certainty.

This workshop focused on the update and broader implementation of the inaugural strategy, while seeking to include and incorporate voices from all over the Danube basin by addressing experiences with weather extremes and impacts to different water-related sectors. At the end of these fruitful discussions the workshop produced some recommendations and suggestions for the update of the Adaptation Strategy. The main takeaways were that ground water is a precious resource in adaptation to droughts, water quality and water supply are aspects that must be considered in climate change adaptation strategies for the Danube River Basin.