Istanbul, 12 April 2012. At a meeting on 12 April 2012, representatives of the ICPDR and the International Black Sea Protection Commission expressed their understanding of joint responsibility for the management of water. As the main tributary to the Black Sea, the water quality of the Danube is directly linked to sensitive environment of the Black Sea.

The International Black Sea Protection Commission (ICPBS or BSC) is responsible for the sustainable management of the Black Sea. Frequent exchanges with the ICPDR through meetings of representatives and the formalization of commitments has a long history.

On 12 April 2012, this was reinforced through a meeting attended by representatives of the two commissions. The ICPBS will soon celebrate its 20th anniversary and the two commissions are looking forward to continuing their fruitful cooperation. One area that was discussed in detail concerns a possible joint efforts to clear the region of plastic waste. 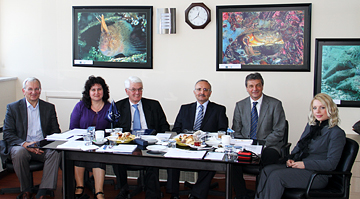 The Black Sea is sometimes considered the world's most isolated sea, connected to the oceans via the Mediterranean Sea through the Bosporus, Dardanelle and Gibraltar straits, and linked with the Sea of Azov in the northeast through the Kerch Strait. The catchment area of the Black Sea is six times larger than its surface with the Danube being its main tributary.