On 27 October, the Donauauen National Park celebrated 20 years of existence. ICPDR Executive Secretary Ivan Zavadksy addressed in his keynote speech the parallels that can be drawn between the creation of the ICPDR and that of Danube Parks - both results of environmental awareness-raising following the fall of the iron curtain and both institutions to be considered as “agents of change”. 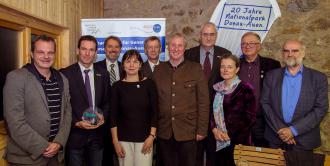 Over the past 20 years, conservation has become a major priority in the Danube River basin and resources and policies have been devoted to environmental work.
Both the ICPDR and the Donauauen (Danube Flood Plains) National Park with their long history of advocating higher environmental standards for the nature along and in the Danube,
have given the world's most international river an exemplary framework for governance.

The ICPDR has grown into a solid legal, institutional and technical framework for cooperation, whereas Danube Parks still depends on the enthusiasm and dedication of individuals
and institutions and external funding via projects and national contributions. Hard work has proven that this support can be granted beyond expectations.
The work of the National Park has been essential for developing and maintaining biological corridors for the diverse fauna and flora in its 38 kilometres stretch of Danube.

The ICPDR was present on this historical moment to express its commitment to pursue the on-going close cooperation towards a cleaner, safer and healthier Danube.
For the ICPDR, the National Park and its close associate Danube Parks are not only friends but also major contributors to the work of our organisation.
In the 2013 Joint Danube Survey - JDS3 – Danube Parks heavily contributed to the project monitoring results for bird species in the Middle and Lower Danube, and identified
the absence of the Sand Martin and low density of Little Ringed Plover, thus helping the ICPDR stress the negative impact of alteration of hydro-morphological processes along the Upper Danube.

DANUBEPARKS is the Network of Protected Areas along the Danube River, working together since 2009. I
t currently consists of 17 Protected Areas from 9 Danube countries, all hotspots for biodiversity.
The association improves consistency of nature protection activities and strengthens the voice of the environment-aware on European level.
From restoration of dynamic river habitats, floodplain forest & meadow management, protection and monitoring of rare species, and nature tourism, Danube Parks protects nature and works for its sustainable conservation.