(Press Release) VIENNA, 31 January – Residence of His Excellency the Ambassador of Germany to The Permanent Mission of the Federal Republic of Germany to the United Nations Vienna and to other International Organizations. As Hungary takes over the annual Presidency of the International Commission for the Protection of the Danube River (ICPDR) today, incoming President Péter Kovács has set the main priorities for his term: finding ways to support the activities of the ICPDR, strengthening water security in the Danube Basin, implementing the Water Framework Directive (WFD) and the Flood Directive (FD), as well as further strengthening the integrated approach of ICPDR and the basin-wide exchange of experiences. 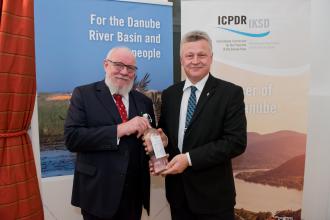 As ICPDR President, Mr. Kovács plans to pursue efforts to further improve the financial framework and sponsoring system to support the activities of the ICPDR and explore possibilities of involving new partners from the basin, who would actively support ICPDR-related activities. Mr. Kovács sees the engagement of the private sector in individual partnerships with the ICPDR as an opportunity to harmonize efforts towards joint concerns and objectives and maximize awareness of positive development results.

Strengthening water security by ensuring availability of a sufficient quantity of clean water for the entire Danube basin is the second priority of the Hungarian Presidency. A number of factors influence the security of water uses, from ecosystems and economy, to accidents and effects of climate change. Most Danube Basin countries are already affected by droughts at least seasonally and/or in part of their territories. Droughts have been highlighted in the newly released ICPDR Climate Change Adaptation Strategy as an important factor that will occur more often and be more intense so increasing the pressure on water resources. It is of utmost importance for the Hungarian Presidency to tackle this through a continued promotion of climate change adoption measures in the Danube River Basin. More frequent or prolonged droughts might affect communal, agricultural and industrial water supply and might increase competition between water uses (drinking water supply, cooling water for energy generation, sustainable irrigation etc.) creating water scarcity in the long term. In the worst case scenario this competition could even be elevated to the transboundary level. One of the accompanying measures foreseen to prevent the elevation of water scarcity to the transboundary level is the launch of a basin-wide water balance calculation method based on the existing European Union Guidance, on the existing international practices (technical and legal) and on the Scoping Study on Water Balance for the Danube River Basin. Enhancing the cooperation with the UN Economic Commission for Europe (UNECE) Water Convention focusing on transboundary water allocation with a joint workshop is also foreseen.

“We can see that the Danube River basin is not being spared the effect of Climate Change. We are concerned that more frequent or prolonged droughts might increase competition between water uses, which could lead to water scarcity in the long-term. We need to start thinking about this on a transboundary level and ensure that all means are used to identify robust measures and promote the mitigation of the effects of drought,” said Mr. Kovács.

For Mr. Kovács, the third priority of his 2019 mandate is to take the next steps in the implementation of the Danube River Basin Management (DRBMP) and the Danube Flood Risk Management Plan (FRMP). 2019 will be an important year in the data collection for the two plans, with the upcoming third Danube River Basin Management DRBMP and 2nd Danube Flood Risk Management Plan (FRMP). Both plans respond to the objectives of the EU Water Framework Directive (WFD) and the EU Floods Directive (FD), which include assessments and measures towards the achievements of the goals of both directives. Besides the necessary data submissions of the Danube countries, the Joint Danube Survey will be organized for the fourth time. For the first time the survey JDS4, will monitor microplastics and the information will be used in the two plans due in 2021.

With 2019 marking 25 years since the signing of the Danube River Protection Convention (DRPC), the major legal instrument for cooperation and transboundary water management in the Danube River Basin, the Hungarian Presidency wants to highlight the results achieved so far, increase the visibility of the ICPDR and reach an even broader public as well other river basin commissions worldwide.

As Water Director at the Ministry of Interior in Budapest, former Deputy State Secretary for Water, and previously Head of Delegation of Hungary to the ICPDR, Mr. Kovács has more than 20 years of experience in water issues and the work of river commissions. He is also the former Chairperson of the UNECE Water Convention.

He praised the ICPDR as a widely and internationally recognized role model, showcasing the benefits of good transboundary cooperation in water resources management, in the most international river basin in the world. Mr. Kovács expressed his appreciation for the outgoing ICPDR Presidency and his predecessor Helge Wendenburg for his excellent Presidency in 2018.