In the framework of the joint EU and UNDP project -“Improving Environmental Monitoring in the Black Sea – Phase II” (EMBLAS) new opportunities for public monitoring of the Black Sea coastal status using so called “ecological sentinels” are developed. 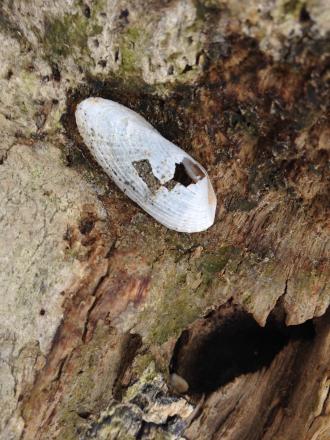 Called "Angel's wings" given the strange characteristic structure of the valves, the mollusc Barnea candida is a true ecological sentinel as it reacts rapidly on the pollution of the Black Sea, mostly nutrients.

Found in the Black Sea, this rare species reacts extremely rapidly to the pollution of the Black Sea, which is mostly caused by nutrients. While it to the Danube Delta in 2013 already, this year, it was found in significantly high quantities in the Danube delta, according to report of the UA Academy of Science; It is incontestably of the biological proofs that the Danube became cleaner and its contribution of nutrients in the Black Sea has decreased.

This mollusc together with others is proposed for the public monitoring of the status of the Black Sea coast in framework of the EMBLAS project. You can read the guide for environmental sentinels here: http://emblasproject.org/wp-content/uploads/2016/09/20_09_2016_Environmental-Sentinels-of-the-Black-Sea.pdf

According to the data of Danube biosphere nature reserve, confirmed last year by the Institute of Marine Biology of the National Academy of Sciences of Ukraine, this mollusc used to be found in significant quantities in the Danube delta till 1980s. It only returned back to the delta in 2013. This mollusc is thus one biological indicator of an increasingly cleaner Danube in this area of the basin and proves that nutrients in the Black Sea have decreased. The Black Sea Angels are subscribed with magic power; children made a lot of stories of the angel losing its wings to combat the pollution of the Black sea, and prevent natural disasters and magic power of the mollusc, created from the lost wings. Touching the sculpture “Angel’s wings” you can make a wish and it comes true. Returning of this mollusc not only to the Danube delta but also to the estuaries of other big rivers of the Black Sea basin is probably one of the main dreams of environmental decision-makers.

To find out more about the Black Sea, follow the link to a film made in the framework of EMBLAS project both in Ukrainian and Georgian territorial waters in 2016: http://emblasproject.org/archives/1702