Vienna, 12 September 2013. In cooperation with ICPDR and Coca-Cola Europe, the International RiverFoundation has awarded the inaugural IRF European Riverprize to the River Rhine. The award is endowed with 25,000 EUR and additional support of twinning activities.

The River Rhine received the award for remarkable achievements in integrated river basin management following a 50 year legacy of river degradation and a devastating chemical accident in 1986. The International Commission for the Protection of the Rhine (ICPR), and other stakeholders in the basin have successfully implemented urban wastewater management strategies and dramatically improved the water quality of the Rhine.  Additionally, in the past 15 years, the adoption of new, integrated policies has resulted in the restoration of a substantial area of floodplains in the densely populated Rhine delta.

The European Riverprize Judging Panel, comprised of an all‐European panel of experts, selected the River Rhine as the winner as they were able to clearly demonstrate leadership, sophistication and an integrated, complex approach to river basin management whilst overcoming a range of challenges and achieving real on-ground outcomes for river and species health. 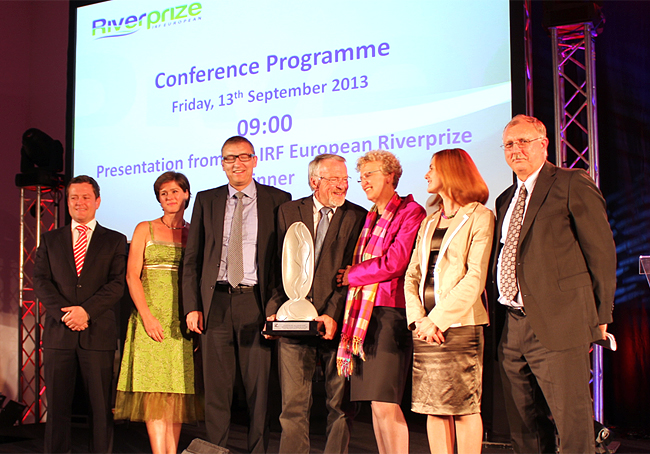 The River Rhine will now automatically qualify as a finalist for the Thiess International Riverprize in 2014.

Alastair Driver, National Conservation Manager at the Environment Agency in England, a European Riverprize judge and a previous Riverprize winner, said “As someone who was heavily involved in the successful Thiess International Riverprize bid by the Thames in 2010, I have to say that I was mightily impressed by the achievements of the Rhine. To have achieved such dramatic improvements in the ecological quality of such a huge river through multi-national co-operation in just a few decades is truly remarkable.”

The ICPR also now has the opportunity to develop a ‘Twinning’ programme – a chance to share their award-winning knowledge in a peer-to-peer relationship with another river basin management organisation. The Twinning programme will receive support from the International RiverFoundation and Global Environment Fund under the IW Learn initiative.

The other finalists in the 2013 IRF European Riverprize were the Órbigo River, the Upper Drau, and the Mura-Drava-Danube.

Following half a century of river degradation and a nineteen eight-six chemical accident near Basel resulting in hundreds of kilometers of river being polluted and the mass death of fish, eels and other aquatic organisms, those responsible for the River Rhine realised that a fundamental shift in thinking was required for the management of this major transnational river

Following investments by the states, municipalities and industry, more than ninety-six per cent of the fifty-eight million inhabitants of the Rhine catchment are today connected to urban wastewater treatment plants and many industrial sites now dispose of waste via modern treatment plants. As a result, water quality has improved considerably and oxygen levels are back to normal.

The chemical status of most groundwater bodies is good; and inventories show that fish species composition in the Rhine is almost complete, with sixty-seven fish species being detected. All historically identified species except for one have returned.

In addition to key river health improvements, the main aims of the International Commission for the Protection of the Rhine include harmony in water use and environmental objectives under the European Union Water Framework, flood prevention, adaption to climate change, sustainable development, human health and cultural heritage.