Danube Basin, 29 June 2013. Activities for kids, tours with wildlife guides, open days at water research facilities: Danube Day is colourful and diverse. On June 29, you can join tens of thousands of people throughout the Danube River Basin and celebrate the most successful river festival in the world.

“For almost 20 years, the ICPDR has worked on aligning the interest of people with the vulnerable nature along our rivers. On Danube Day, we celebrate our achievements. Danube Day conveys a positive message: we have achieved a lot, now join the celebrations and help to improve our rivers even further!”, says Ermina Salkičević-Dizdarević, ICPDR President of 2013 and Deputy Minister for International Trade and Economic Relations.

Danube Day, which encourages people throughout the Danube River Basin to “get active for the rivers”, is an annual event organised by the International Commission for the Protection of the Danube River (ICPDR) in partnership with Coca-Cola Hellenic, The Coca-Cola Company and national partners.

This year, the joys of Danube Day follow soon after devastating floods, as Sir Michael Llewellyn-Smith of Coca-Cola Hellenic highlights: “The recent flooding that has occurred in countries through which the Danube and its tributaries flow reminds us how important it is to respect, and protect, our water resources. On this Danube Day we should remember the people who sadly lost their lives, and others whose homes and business were swept away in the floods, as together with our stakeholders, we at the Coca-Coly system continue our efforts in caring for the Danube River in a responsible and sustainable way.”

This year, Danube Day highlights the need to increase efforts to protect sturgeons: six species of sturgeons were once native to rivers throughout the Danube River Basin, including the beluga sturgeons which can reach lengths of up to 6 metres. Today, the remaining five species are threatened and three issues are of particular concern: (1) the protection of habitats, for example for spawning; (2) illegal fisheries and caviar trade; (3) longitudinal connectivity – the possibility for them to pass dams mostly of hydropower plants to reach spawning grounds in upstream areas.

Danube Day has many faces: every country celebrates it through local, often personal ways. Street festivals in Belgrade, lectures in Romania, Facebook-organised flash mobs in Austria – the basin’s diversity is reflected in these many and varied events. Johannes Hahn, EU Commissioner for Rural Development, highlighted the many initiatives that have emerged from the EU Strategy for the Danube Region, for which the ICPDR is an important partner.
Over time, Danube Day has grown into the biggest river festival in the world. More then 230 events were held in 2011 with tens of thousands of participants, and Danube Day 2012 will build on this success. Essential for this growth is a fruitful cooperation between the ICPDR and the Coca-Cola system: the Green Danube Partnership. Find more information about local events in your country on www.danubeday.org or see the video message of EU Commissioner Hahn at http://www.icpdr.org/main/danube-day-2013.

Danube Day is celebrated on June 29, the signing date of the Danube River Protection Convention, throughout the Danube river basin, to pay tribute to the vital role the Danube and its tributaries play in people’s lives: providing water, food, power, transport, recreation and prosperity; while drawing attention to the importance of conservation. Danube Day was first held in 2004. 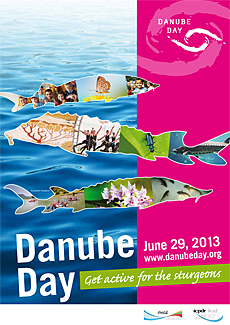