On 8-9 June 2017, the ICPDR held the 15th Standing Working Group Meeting in Brussels. From expert group reports to new projects and initiatives such as JOINTISZA, the preparation of the 4th edition of the Joint Danube Survey and visibility measures including a short version of the Danube Declaration, key-issues were discussed over the two-day meeting. 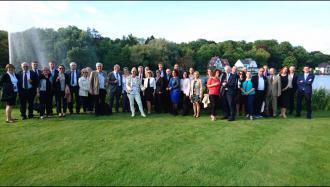 The priorities also include the development of an ICPDR Guidance on sustainable agriculture and the pilot activities on Mixed Environment Transport External Expert Team (METEET). The Directorate General for Environment (DG ENV) of the EU will organize a TAIEX workshop to inform the countries about EU funding opportunities. Sturgeon conservation is another important topic which received strong support from DG ENV Director General Mr. Daniel Calleja Crespo during the morning session.

The presidency of the European Union also brought an extraordinary visibility to the 2017 basin-wide celebrations of Danube Day on 29 June. Almost 260,000 individuals were reached via a very active social media campaign over Twitter and Facebook with hashtag #DanubeDay.

The focussed and lively discussions demonstrated once again how well cooperation mechanisms within the ICPDR work between contracting parties of the ICPDR.